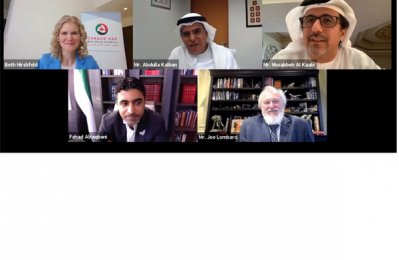 Championing UAE economic diversification and industrialisation, Emirates Global Aluminium (EGA), the world’s biggest `premium aluminium’ producer, shared lessons for business and its close connection with Canada at a webinar hosted by the Canada-UAE Business Council (CUBC), yesterday (April 6).
EGA’s success story in becoming the largest made-in-the UAE export after oil and gas is a testament to the UAE’s forward-looking and business-minded environment, and highlights the vast UAE opportunities for business in the sector and beyond, the speakers said at the webinar which was conducted via videoconference.
The guest speakers were:  Abdulla Kalban, Managing Director, Emirates Global Aluminium, and business leaders Musabbeh Al Kaabi, CEO, UAE Investments, Mubadala Investment Company, and Joe Lombard, Global Managing Director, Metals, Hatch.
The session also welcomed HE Fahad Saeed Al Raqbani, Canadian Ambassador to the UAE, and HE Jean-Philippe Linteau, Consul General of Canada in Dubai and the Northern Emirates.
Al Kaabi began the session by outlining the UAE’s vision for economic diversification and its ambitious agenda to become a leading global hub for innovation, sustainability, industrialization, and the creative and knowledge economies.
As a key architect in growing EGA to one of the UAE’s most important companies, Kalban highlighted the heritage and the growth of EGA from the 1970s to its leading role in today’s aluminium sector, as well as the UAE advantages that supported this growth, and opportunities for businesses in the UAE, including Operation 300bn.  He also recognised EGA’s close relationship with Canada, having worked closely with several organisations, including Hatch, over the years.
Joe Lombard and Kalban engaged in a discussion about EGA’s growth and the importance of developing home-grown technologies, as well as fostering a culture of innovation and responsiveness to client needs.  They discussed EGA’s evolution to a fully integrated aluminium producer and where opportunities for companies to participate in the aluminium value chain exist.  The leaders also delved into EGA’s leadership in sustainability and offered lessons for companies looking to incorporate sustainability measures into their operations.
Having explored EGA’s tremendous growth, Al Kaabi examined with Kalban the key elements of EGA’s and the UAE’s agendas and approaches that were important to its success and which offer key advantages to businesses operating in the UAE.
He further explored EGA’s continuing innovation, its strong focus on logistics as a gateway to the region, and the development of home-grown talent to support the UAE’s focus on building one of the world’s greatest knowledge economies.
HE Fahad Saeed Al Raqbani, UAE Ambassador to Canada, said: “EGA is an industrial champion and global success story whose impact is felt everyday around the world through the products and buildings we use and rely on.  EGA’s close collaboration with Canadian organizations over the years has yielded powerful results and shows enormous potential for the two countries to work closely together as the UAE implements Operation 300bn, Energy Strategy 2050, and the development of a world-leading creative and knowledge economy.”
HE Jean-Philippe Linteau, Consul General of Canada in Dubai and the Northern Emirates, UAE, said: “Canada and the UAE are both among the 5 largest aluminum producers in the world. I salute EGA’s achievements and its commitment to innovation to drive future growth. Our two nations will continue to work together to build sustainable economies and strengthen our trade relationship.”
Abdulla Kalban, Managing Director, Emirates Global Aluminium. Said: EGA has played a major role in the industrialisation and economic diversification of the UAE for the past 40 years.  Our growth has been possible due to a focus on innovation, talent development, and strong global partnerships, including those with Canada.  With the UAE’s recent announcement of its further industrialization plan for the next 10 years, Operation 300bn, I hope that all companies – whether within the sector and beyond – will see EGA as an example of what is possible for business in the UAE.
Musabbeh Al Kaabi, CUBC Co-Chair and CEO, UAE Investments, Mubadala Investment Company, said: “As a member of EGA’s Board of Directors and Chair of its Finance and Commercial Committee, I have seen first-hand the remarkable development of EGA and its importance in supporting the UAE’s economic diversification and industrialization.  EGA is a testament to the UAE’s ambitious agenda and a lesson about the innovative businesses and models that can be developed in the UAE’s forward looking and business-minded environment.  I encourage Canadian businesses to capitalize on the UAE’s geographic and business strengths in their global expansion plans.”
Joe Lombard, CUBC Board Member and Global Managing Director, Metals, Hatch, said: “It takes a special company and country to build an aluminium company in the middle of the desert and grow it to become the world’s largest “premium aluminium” producer.  It has been a privilege and pleasure to work with EGA and the UAE to turn this vision into reality.  EGA’s approach is a testament to the leadership in EGA and the UAE and a lesson for companies in the sector and well beyond.”  --TradeArabia News Service