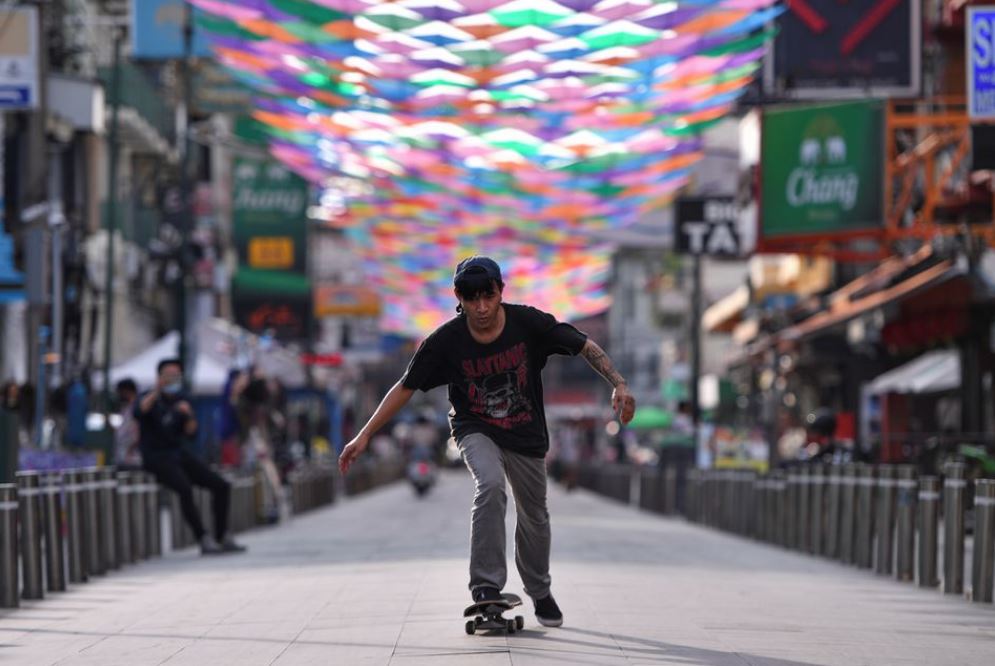 A restaurant worker skateboards on an almost empty Khaosan Road during Songkran holiday which marks the Thai New Year during the coronavirus disease (Covid-19) outbreak, as the country deals with a fresh wave of infections after tackling earlier outbreaks, in Bangkok, Thailand, April 13, 2021. (Image credit: Reuters)

Thailand reported on Wednesday 1,335 new Covid-19 cases, the biggest daily rise since the start of the pandemic and the third record rise this week, as the Southeast Asian country struggles with a new wave of infections.

The spike in cases comes as Thais celebrate the Songkran new year holidays and authorities have urged people to avoid unnecessary travel and reduce gatherings to help limit the outbreak, which includes the highly transmissible B.1.1.7 variant first identified in Britain.

"The period after Songkran is a critical time to control the outbreak, if not we could see 10,000 to 20,000 cases per day," senior health official, Opas Karnkawinpong, said, urging people to work from home for two weeks after the holidays.

Thailand has up to now managed to keep case numbers relatively contained compared to many other countries, though its vaccine rollout has been relatively slow.

Of the new infections reported on Wednesday, 351 were in Bangkok, the epicentre of the third wave of cases. No new deaths were reported.

The latest outbreak has raised concerns about strains on the healthcare system. All positive cases have to be admitted into hospital under Thai rules, with 7,491 patients currently being treated.

Thailand had received another one million doses of China's Sinovac vaccine, of which 600,000 doses will be used to inoculate all frontline medical workers this month, Opas said.

The country so far has received two million Sinovac doses and 117,300 shots from AstraZeneca.

Up to now, 579,305 doses have been administered, of those 73,561 were the second dose, Opas said, describing Thailand's vaccine drive as "on track."

Thailand's has vaccinated less than 0.4 per cent of its population, trailing neighbours like Malaysia with 1.5 per cent and 14.6 per cent in Singapore, according to a Reuters estimate.

Authorities have defended the performance saying it was suitable for the country.

Thailand's main vaccination drive is expected to start in June, using locally-produced AstraZeneca shots with the aim of inoculating half of its adult population by the end of the year.