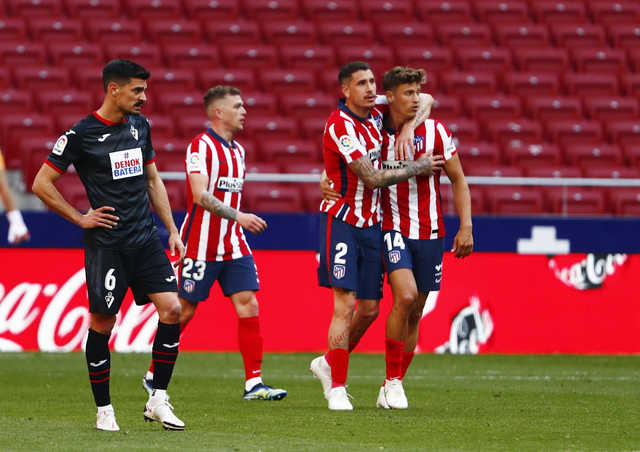 MADRID - La Liga leaders Atletico Madrid thrashed basement club Eibar 5-0 on Sunday in an emphatic response to a stuttering run of results which had let their rivals back into the title race.

Atletico were missing two of their top forwards in Luis Suarez and Joao Felix but Argentine striker Angel Correa took responsibility in attack, scoring twice at the end of the first half to put the hosts in charge.

Yannick Carrasco further stretched their lead soon after the interval before Marcos Llorente struck twice to complete the rout as his side picked up a first victory in three matches after drawing 1-1 at Real Betis and losing 1-0 at Sevilla.

Atletico top the standings on 70 points after 31 games and extended their advantage with second-placed Real Madrid to three points after the champions were held 0-0 at Getafe later on Sunday.

Barcelona are third on 65 with a game in hand while fourth-placed Sevilla stayed in contention to move on to 64 points after beating Real Sociedad 2-1.

"It gives us enormous joy to win this game so comfortably and so convincingly," Correa told reporters.

"The game was pretty tight until the first goal but then the game opened up and we were able to wrap it up."

Eibar are bottom with 23 points and have failed to win in their last 14 matches, 10 of which they have lost.

The visitors did not have a single shot on goal although they gave Atletico a fright midway through the first half when Alejandro Pozo whipped in a cross to an unmarked Kevin Rodrigues, who narrowly failed to make contact with the ball.

Atletico dominated possession but did not have a clear opportunity until Correa broke the deadlock, arriving at the far post to prod a freekick into the net.

The Argentine forward struck again moments later, swivelling past a defender before producing a classy finish to further make amends for missing several opportunities against Betis.

"The great thing about football is that every week you have a chance for revenge. I was feeling a little due to missing those chances but today I'm happy as this time they went in," added Correa.