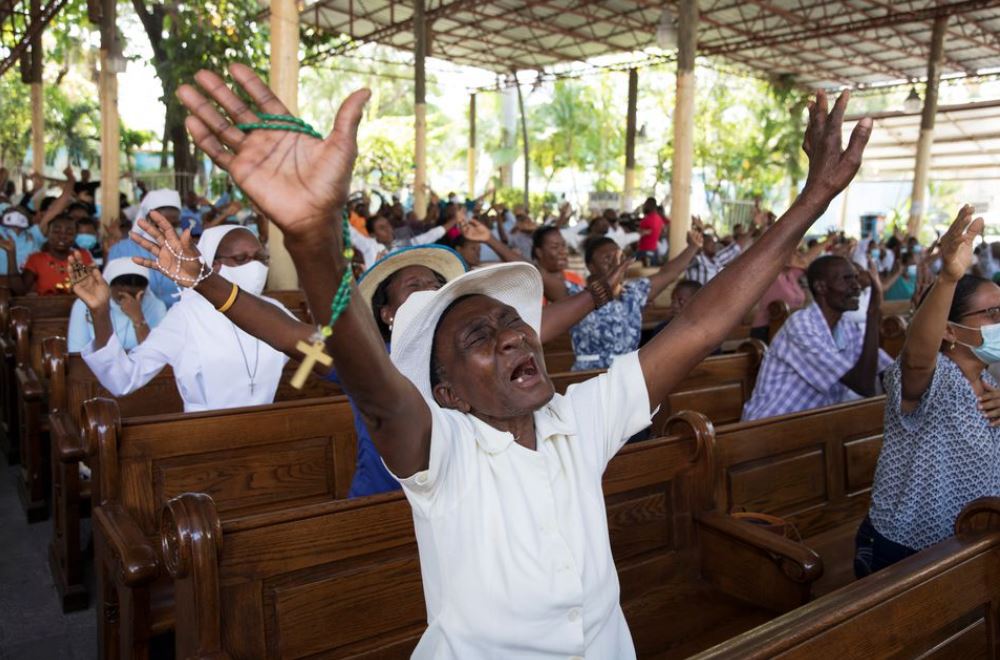 People pray against an epidemic of kidnappings sweeping Haiti, amid deepening political unrest and economic misery, during a mass in Port-au-Prince, Haiti April 15, 2021. (Image credit: Reuters)

A wave of kidnappings is sweeping Haiti. But even in a country growing inured to horrific abductions, the case of five-year-old Olslina Janneus sparked outrage.

Olslina was snatched off the streets of the capital Port-au-Prince in late January as she was playing. The child's corpse, bearing signs of strangulation, turned up a week later, according to her mother, Nadege Saint Hilaire, a peanut vendor who said she couldn't pay the $4,000 ransom. Saint Hilaire's cries filled the airwaves as she spoke to a few local radio stations seeking help raising funds to cover funeral costs.

Saint Hilaire is now in hiding after receiving death threats, she said, from the same gang that killed her daughter. "I wasn't supposed to go to the radio to denounce what had happened," she told Reuters.

Police in her impoverished and crime-ridden neighbourhood, Martissant, told Reuters they were investigating the case.

Haiti’s epidemic of kidnappings is the latest crisis to befall this Caribbean island nation of around 11 million people, roiled by deepening political unrest and economic misery. Kidnappings last year tripled to 234 cases compared to 2019, according to official data compiled by the United Nations.

The real figures are likely much higher because many Haitians don't report abductions, fearing retribution from criminal gangs, according to attorney Gedeon Jean, director of the nonprofit Center for Human Rights Analysis and Research in Port-au-Prince. He said the research centre recorded 796 kidnappings last year.

Haiti's national police force did not respond to a request for comment. President Jovenel Moise has said repeatedly that his government is doing all it can, and has put more resources into anti-kidnapping efforts. Still, he publicly acknowledged on April 14 that “kidnappings have become generalized” and that efforts to combat persistent insecurity have been "ineffective."

Human rights activists and a new report from Harvard Law School’s International Human Rights Clinic allege that Moise’s government has allied itself with violent criminal gangs to maintain its grip on power and to suppress dissent. Opposition groups have called for Moise to resign and hand power to a transitional government that would delay presidential and legislative elections slated for September until the nation is stable enough to ensure a free and fair contest.

Haiti’s acting Prime Minister Claude Joseph denied those allegations and the report's findings. He said anti-democratic forces are whipping up violence to destabilize Moise's administration in an election year. “They are fomenting the gangs to stop there being elections,” Joseph told Reuters.

Criminals have targeted some poor people, like Saint Hilaire, for modest sums. Many more victims come from the ranks of the Haitian middle class—teachers, priests, civil servants, small business owners. Such targets aren't rich enough to afford bodyguards but have enough assets or connections to scrape up a ransom.

In one of the most high-profile recent cases, five Catholic priests, two nuns and three laymen were kidnapped on April 11 in the commune of Croix-des-Bouquets, northeast of the capital. Four members of the group were subsequently released and six are still missing, according to an April 25 statement by the Society of Priests of St. Jacques, a French missionary society linked to four of the kidnapped priests. An official with that group declined to comment on whether a ransom was paid.

“For some time now, we have been witnessing the descent into hell of Haitian society,” the Roman Catholic Archdiocese of Port-au-Prince said in a statement earlier this month.

Haiti last experienced a major surge in kidnappings and gang violence after a rebellion toppled then-President Jean-Bertrand Aristide in 2004, prompting the United Nations to send in a peacekeeping force.

The departure of that force in October 2019 was followed by a resurgence in gang crime, according to human-rights activists, who say kidnapping has proven lucrative at a time when Haiti's economy is teetering.

Rights activists say politics also play a role. They allege Moise’s government has harnessed criminal groups to terrorize neighbourhoods known as opposition strongholds and to quell public dissent amid street protests that have rocked the country the past three years.

The report released April 22 by the International Human Rights Clinic at Harvard Law School alleges “high-level government involvement in the planning, execution and cover-up” of three gang-led attacks on poor neighbourhoods between 2018 and 2020 that left at least 240 civilians dead. The report relied on investigations of the attacks by Haitian and international human rights experts. It alleges the government provided gangs with money, weapons and vehicles and shielded them from prosecution.

Kidnapping is an outgrowth of impunity for criminal organisations, according to Rosy Auguste Ducena, program manager of the Port-au-Prince-based National Network for the Defense of Human Rights.

"We are talking about a regime that has allied itself with armed gangs," Ducena said.

Justice Minister Rockefeller Vincent denied any government alliance with gangs. He told Reuters in December that the wave of kidnappings was the work of political enemies seeking to undermine Moise "by creating a sense of chaos."

The rise in kidnappings has petrified many Haitians. The heads of seven private business associations this month issued a joint statement saying they had reached "a saturation point" with soaring crime. They endorsed a nationwide work stoppage that occurred on April 15 to protest Haiti’s security crisis.

"Kidnapping is killing the economy," said Haitian economist Etzer Emile. He said the tourism and entertainment sectors have withered.

Moise's administration says it is working hard to end the terror. Two years ago it revived a commission aimed at disarming gang members and reintegrating them into society. Over the past year, the government has increased the police budget and solicited advice from Colombia, which once battled its own kidnapping epidemic. In March, Haiti created an anti-kidnapping task force to attack the problem with tactics such as tracing laundered ransom money.

Still, four policemen died last month in a gun battle with alleged criminals in a slum where kidnapping victims are often held. The government declared a month-long state of emergency in gang-controlled neighbourhoods. Yet abductions continue to mount.

Moise, who has opted not to seek re-election this September, has defied the opposition's calls for him to step down early. On April 14 he issued a statement saying he aimed to form a government of national unity to better tackle the "pressing problem of insecurity."

Many Haitians remain sceptical—and on edge.

One victim was a 29-year-old doctor. He was kidnapped in his own vehicle last November after leaving the Port-au-Prince hospital where he had just finished an overnight shift. He told Reuters his story on condition of anonymity.

At dawn, four armed assailants hustled him into the back seat, threw a hood over his head and held him at gunpoint as they drove, he said. His captors eventually tossed him into a room with three other abductees—a man and two women—who had been snatched earlier.

The physician said his kidnappers ordered him to phone his family to request $500,000 for his release. The first two people he tried said they couldn’t pay. The kidnappers slapped him and delivered a threat.

"They said that if I called a third person that didn't give me a satisfying response, they would kill me," he said.

The doctor's girlfriend said she and three friends negotiated with the gang. She wouldn't say how much they paid, fearful of becoming targets for other criminals.

The doctor said he reported his abduction to Haiti's national anti-kidnapping police unit. That unit did not respond to requests for comment.

The physician does not know the fate of his fellow abductees. He said the kidnappers poured melted Styrofoam on their skin because their families had yet to pay up.

Saint Hilaire, the mother of the young girl who was kidnapped and murdered, said she continues to watch her back after speaking publicly about the abduction.

The kidnappers “told me to make sure I never ran into them, because they would kill me,” she said.