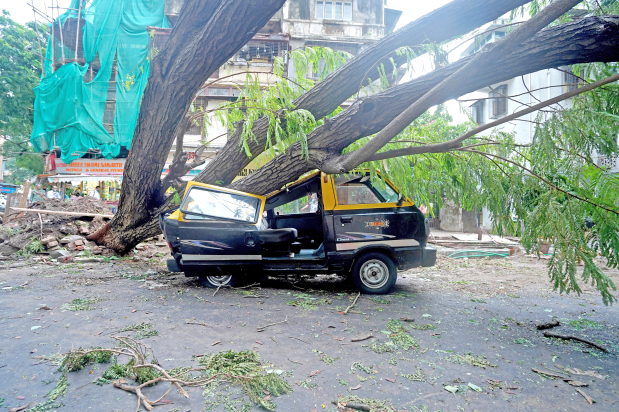 A damaged vehicle is seen under a fallen tree on a road after heavy winds caused by Cyclone Tauktae, in Mumbai, India, May 18, 2021. REUTERS/Hemanshi Kamani

MUMBAI: The Indian Navy mounted a massive air and sea rescue mission yesterday for 79 oil workers and crew whose barge sank in heavy seas following a powerful cyclone that tore up the west coast killing at least 29 people.

Around 182 of those on board the barge, which sank off the coast of Mumbai, were rescued from the huge waves, the navy said.

It has piled pressure on Indian authorities as they grapple with a massive rise in coronavirus infections and deaths as well as a shortage of beds and oxygen in hospitals.

“This is one of the most challenging search and rescue operations I have seen in the last four decades,” Murlidhar Sadashiv Pawar, Deputy Chief of Naval Staff, said.

The storm made landfall in Gujarat state yesterday and was expected to weaken overnight, the Indian Meteorological Department said. Gujarat Chief Minister Vijay Rupani said 160 state roads had been destroyed, 40,000 trees uprooted and several houses damaged by the cyclone.

Madhwal said five ships backed by surveillance aircraft were scouring the site of the sinking of the barge “P305” in the Bombay High oilfield, where the country’s biggest offshore oil rigs are located.

On Monday, the crew sent an SOS that the ship had lost control as the cyclone roared past Mumbai. Naval ships were sent to the area and yesterday, as the barge started sinking, many of the crew were rescued from the sea.