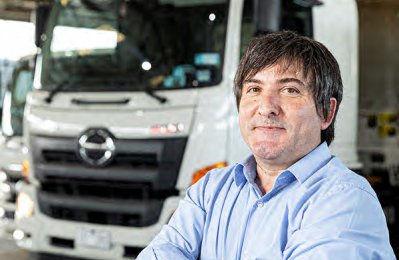 Frank Cardamone
After starting with a single truck in Melbourne in 2008, Waste Wise now operates a fleet of more than 50 Hino trucks with Allison fully automatic transmissions and is Australia’s market leader in restricted access waste management solutions for multi-level and strata developments.
Waste Wise was started and is still owned and operated by Frank Cardamone, answering a growing need from new large scale apartment developments for waste pick-ups by private contractors. The company expanded operations into Sydney in 2015.
The trucks often operate in confined and narrow areas where maneuverability is vital and Cardamone says the Allison automatic transmissions are vital for ensuring safe and efficient operation in these areas.
“Allison is the best transmission in the market and the easiest to operate in what are very challenging conditions. Our drivers love the Allison Automatics because they are less fatiguing to drive and are easier to operate in the tight conditions we have to operate in,” said Cardamone.
“Hino is my preferred choice of truck and the fact that they are factory fitted with Allison transmissions is also an important factor in ensuring our fleet works safely and efficiently.”
The WasteWise fleet is made up of predominantly Hino 500 Series FD Standard Cab automatics using Allison 2500 Series  six speed automatics with rear loader waste disposal bodies. The dual PTO functionality offered by the Allison along with its 339 Nm torque capacity is another important factor for Waste Wise operating its rear loaders.
“The two most important aspects for us are safety and reliability and the Hino with the Allison Automatic deliver on both of those criteria,” said Cardamone.
WasteWise is currently planning its own Multi Recycling Facility (MRF) on a 6.5-acre site at its new headquarters in the northern Melbourne suburb of Thomastown.-- TradeArabia News Service