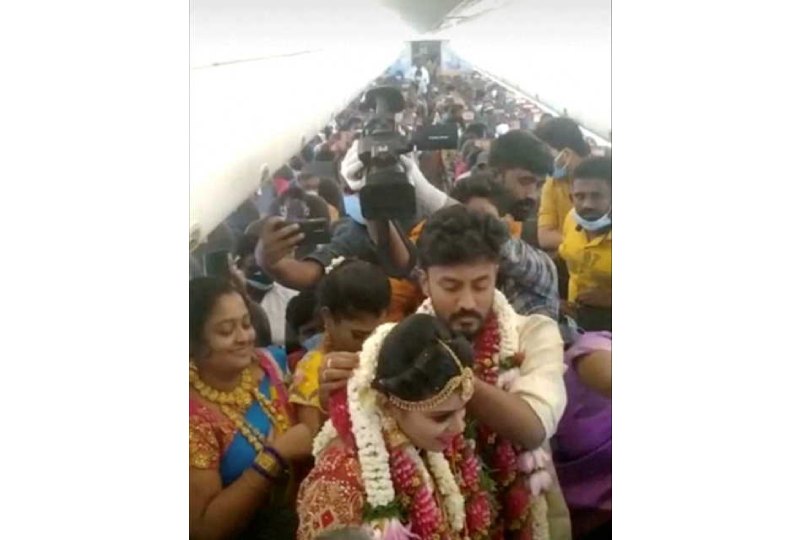 New Delhi:  Indian civil aviation regulators have begun an investigation after a video went viral on social media that appeared to show a couple getting married midflight surrounded by family and friends.

In the video on social media, guests and photographers could be seen crowded around the bride and groom on an aircraft, and most were not wearing masks.

Rakesh-Dakshina from Madurai, who rented a plane for two hours and got married in the wedding sky. Family members who flew from Madurai to Bangalore after getting married by SpiceJet flight from Bangalore to Madurai. #COVID19India #lockdown @TV9Telugu #weddingrestrictions pic.twitter.com/9nDyn3MM4n

India is in the midst of a deadly second wave of coronavirus infections. In Tamil Nadu state, where the inflight wedding took place, temples and meeting halls are shut and weddings and other social events have a maximum attendance limit of 50 people.

A couple tied the knot on-board a chartered flight from Madurai, Tamil Nadu. Their relatives & guests were on the same flight.

An official at the Directorate General of Civil Aviation said SpiceJet had been asked to file a complaint against those who violated the safety guidelines while the crew has been rostered off.

"We will conduct a detailed enquiry and based on the outcome shall take further action," the official said.

A spokesman for SpiceJet said the aircraft was chartered by a travel agent in Madurai on May 23 for a flight after a wedding. He said the airline was taking action against those who violated the COVID safety rules.

The agent and guests were briefed in detail on social distancing and safety norms as per COVID guidelines and civil aviation authority rules, he said.

"Despite repeated requests and reminders the passengers did not follow COVID guidelines and the airline is taking appropriate action as per rules," the spokesman said.