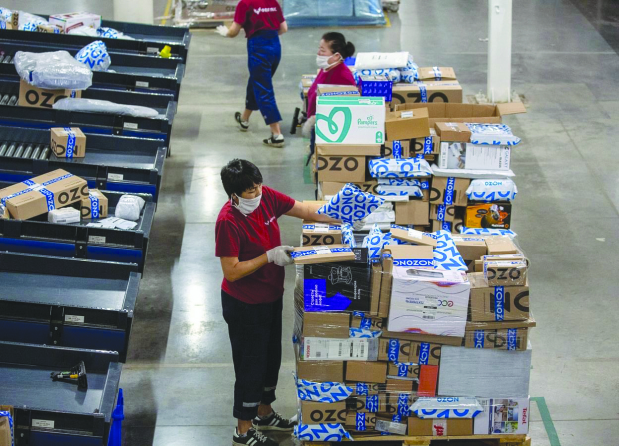 WASHINGTON: US employers boosted hiring in May and raised wages as they competed for workers, with millions of unemployed Americans at home likely because of childcare issues and generous unemployment cheques.

The Labour Department’s closely watched employment report yesterday offered some assurance that the economic recovery from the pandemic recession was on track after worker shortages also blamed on lingering fears over Covid-19 sharply restrained employment growth in April.

There has been handwringing among some economists and investors that growth was stagnating at a time when inflation was rising. The economy is being underpinned by an improving public health situation and massive fiscal stimulus.

Nonfarm payrolls increased by 559,000 jobs last month. Data for April was revised slightly up to show payrolls rising by 278,000 jobs instead of 266,000 as previously reported.

That left employment about 7.6 million jobs below its peak in February 2020. Economists had forecast 650,000 jobs created in May. About 9.3m people were classified as officially unemployed last month.

But the reopening of the economy is straining the supply chain. Millions of workers, mostly women, remain at home as most school districts have not moved to full-time in-person learning.

Government-funded benefits, including a $300 weekly unemployment subsidy, are also constraining hiring. Republican governors in 25 states are terminating this benefit and other unemployment programmes funded by the federal government for residents starting next Saturday.

These states account for more than 40 per cent of the workforce. The expanded benefits will end in early September across the country. That, together with more people vaccinated and schools fully reopening in the fall, is expected to ease the worker scarcity by September.

With a record 8.1m jobs to fill, employers are raising wages. Average hourly earnings increased a solid 0.5pc after shooting up 0.7pc in April. That raised the year-on-year increase in wages to 2pc from 0.4pc in April.

Sustained wage growth could strengthen the argument among some economists that higher inflation could last longer rather than being transitory as currently envisioned by Fed chair Jerome Powell.

The government reported last Friday that a measure of underlying inflation tracked by the Fed for its 2pc target accelerated 3.1pc on a year-on-year basis in April, the largest increase since July 1992.

Still, most economists do not expect the US central bank to start withdrawing the massive support it has offered to the economy anytime soon.

Last month’s increase in hiring was led by the leisure and hospitality industry, which added 292,000 jobs, with restaurants and bars accounting for 186,000 of those positions. Local government education employment increased by 53,000 jobs, reflecting the continued resumption of in-person learning and other school-related activities in some parts of the country.