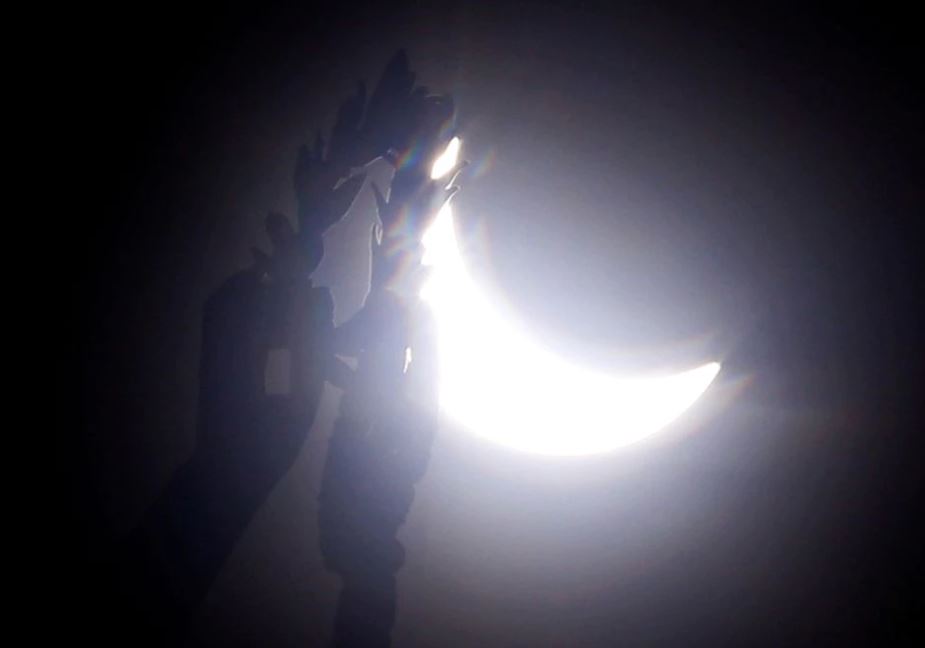 A partial solar eclipse is seen beside the 'Golden Victoria' statue on top of the Victory Column (Siegessaule) in Berlin March 20, 2015. REUTERS/Fabrizio Bensch/File Photo

Electrical transmission networks in Germany are preparing for a solar eclipse this week that could trigger a sudden fall of around 1 gigawatt (GW) in solar power output, grid firm Amprion said on Monday.

The event will take place between 0920 GMT and 1140 GMT on Thursday in northern Europe, and Amprion background paper said.

Although it is expected to have a more modest impact than 2015's solar eclipse across Europe -- which reduced output by 15GW in a country that can need up to 80 GW of power on winter days -- Germany's four high-voltage grid operators, or TSOs, must keep the grids in balance because large amounts of power cannot be stored.

"The network frequency has to be stable and swings in production must be balanced," said an Amprion spokeswoman.

The TSOs can draw on alternative energy sources such as coal, gas, nuclear and hydroelectric energy. One GW is equivalent to the installed capacity of a nuclear power station.

They have also tendered for 500 megawatts of balancing capacity, through which they can boost power supply within five minutes, and a further 500 MW allowing them to reduce input and quickly smooth variations in supply.

The TSOs, which also include TransnetBW and TenneT, will issue analysis on Wednesday of the likely grid situation on June 10, Amprion said.

Germany can in theory reap 40 GW of solar power but output depends on the sunshine intensity and cloud cover.

Northern German skies could be 20% covered by the eclipse, while in southern Germany, the rate will likely be 2.5%.

Eastern German TSO 50Hertz said that Berlin could see 13% coverage with lower rates in the states of Saxony and Thuringia.