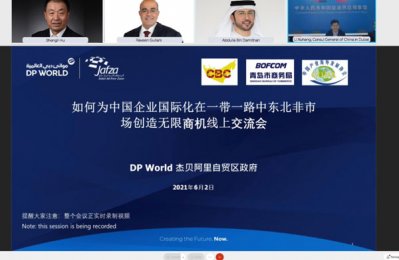 DP World, UAE Region, a leading enabler of smart trade, highlighted its strategic support and partnership to Chinese companies with the aim of boosting trade between the UAE and China. The smart trade enabler hosted a webinar in partnership with the Chinese Business Council in the UAE to discuss business opportunities for Chinese companies in the Middle East and North Africa (Mena) region under the Belt & Road Initiative (BRI).
In his opening speech Abdulla Bin Damithan, CEO & Managing Director, DP World - UAE Region and Jafza shed light on how Dubai is a gateway for Chinese exporters, allowing access to four billion customers. H.E. Li Xuhang, Consul General of the People’s Republic of China in Dubai gave insights on bilateral strategic relations, while Zhenwei He, Secretary General of China Overseas Development Association highlighted the China-UAE economic and trade outlook.
In alignment with their goal of augmenting UAE-China trade, DP World in partnership with Zhejiang China Commodity City Group (CCC) recently launched the Yiwu Market as part of the first phase of Dubai Traders Market, located in the heart of Jafza. Dubai Traders Market will span approximately 800,000 square metres, with Yiwu Market covering about 200,000 square metres. The market will give traders and businesses from across the globe access to wholesale discounts with minimised supply chain costs and turnaround times by leveraging DP World’s logistical expertise.
A thriving business hub
As one of the biggest trade partners of the UAE, China’s non-oil trade in 2019, valued at over $49 billion, while imports stood at 15 per cent of total UAE imports of non-oil trade, valued at $33 billion. Contributing to this burgeoning growth in the UAE, DP World, UAE Region’s Jebel Ali hub in Dubai, consisting of Jebel Ali Port and Jafza creates the most strategic multimodal trade hub of the region.
For over 40 years, Jebel Ali Port has been the premier trading port for the Gulf economies to the international trade routes with exceptional efficiency. Jafza accounts for almost 24 per cent of total FDI flow into the country and contributes 23.8 per cent of Dubai’s GDP with over 8,000 companies.
Abdulla Bin Damithan, CEO & Managing Director, DP World - UAE Region and Jafza said: “Bilateral trade between the UAE and China has surged over the years due to factors like strong trade relations and people-to-people synergies. Considering these factors, the UAE is a strategic partner of the Belt and Road Initiative that brings in a whopping 34 per cent of the global GDP. In alignment with the goals of our wise leadership and as a driver for economic growth in the UAE, we, have always been welcoming of Chinese companies from an array of sectors. Owing to our incentives and initiatives, we have seen an increasing interest from Chinese companies to invest in Dubai and strengthen their presence in Jebel Ali. With ‘Operation 300bn', a national industrial strategy, we aim at raising the manufacturing sector’s contribution from Dh133 to Dh300 billion over the next 10 years, and support Dubai’s leadership vision to increase its foreign trade from Dh1.4 trillion to Dh2 trillion.”
Strategic location and tremendous potential
The UAE’s geographical location and the dynamic market have proved as key differentiators that have captured the attention of the Chinese business community. This has given the country a vital status in the BRI, which attempts to link China by both sea and land to markets in Asia and Europe.
H.E. Li Xuhang, Consul General of the People’s Republic of China in Dubai explained: “2021 marks the 100th anniversary of the founding of the Communist Party of China. China has won a complete victory in the fight against poverty. China has entered a new stage of development and embarked on a new journey towards fully building a modern socialist country. Under the guidance of the new development philosophy of innovation, coordination, environmental friendliness, openness, and sharing, China will speed up the construction of a new development paradigm with domestic circulation as the mainstay and domestic and international circulations reinforcing each other, which will bring more extensive cooperation between China and the UAE. China will uphold the principles of extensive consultation, joint contribution, and shared benefits, so that the "Belt and Road" Initiative will better benefit the people of all countries and promote the building of a community with a shared future for mankind.”
With China as the key contributor to the success of Jebel Ali, the hub consists of companies from sectors like oil and gas, metal, steel and construction, electronics and electrical goods, machinery and equipment, auto and ecommerce among others. China is not only the top country by trade value at Jafza, but it is also the 4th in terms of trade volume.-–TradeArabia News Service