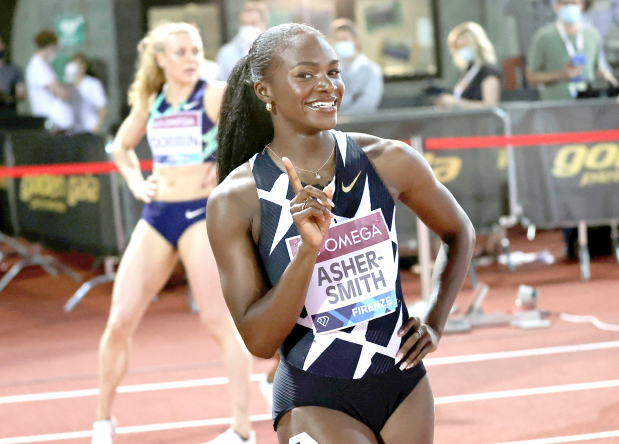 FLORENCE: Britain’s Dina Asher-Smith clocked her fastest time outside of a major championships as she powered to victory in the 200 metres at the third Diamond League meeting of the season in Florence yesterday.

The 25-year-old world champion laid down a strong marker ahead of the Tokyo Olympics with a time of 22.06 seconds that left her more than half a second ahead of the Ivory Coast’s Marie-Josee Ta Lou.

Asher-Smith’s time marked her season’s best run, leaving the Briton in high spirits heading towards the Olympics next month.

In the men’s 100m, South African Akani Simbine edged Britain’s Chijindu Ujah to the line by two-hundredths of a second with a time of 10.08 seconds.

The surprise of the evening in Florence, which was hosting the meeting while Rome’s Stadio Olimpico is unavailable as it hosts Euro 2020 soccer matches, was Norwegian Jakob Ingebrigtsen setting a European record in the men’s 5,000m.

The 20-year-old stormed clear in the final 200m to finish in 12:48.45, smashing his personal best by almost 14 seconds and finishing more than six seconds clear of world record holder Joshua Cheptegei who trailed in sixth.

Sifan Hassan of the Netherlands edged ahead of Kenya’s Olympic champion Faith Kipyegon on the final straight to win a thrilling women’s 1,500m by 0.28 seconds.