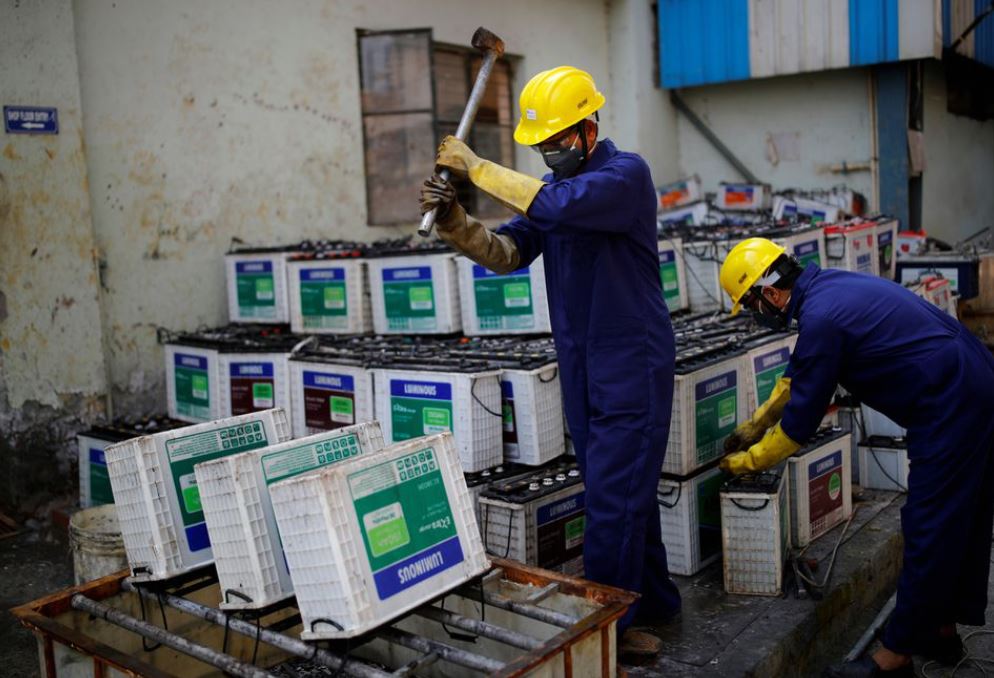 Workers dismantle batteries to obtain lead from them at ACE Green recycling Inc in Ghaziabad, on the outskirts of New Delhi, India, February 15, 2021 via Reuters

A jump in demand for traditional lead-acid car batteries and lingering freight problems have created shortages that have been felt most acutely in the huge U.S. automotive sector and driven up lead prices globally.

While other battery metals, such as lithium and cobalt, have been in demand for electric vehicles, replacement batteries for vehicles powered by internal combustion engines account for half of global demand in the 12 million tonne lead market.

The United States accounts for 13% of global lead demand, but consumption has been boosted by the end of COVID-19 lockdowns as motorists seek replacements for lead-acid batteries that have failed after long periods without use.

Prices were also boosted last week by rumours of a lead refinery declaring force majeure, analysts and traders said, though no such news subsequently emerged.

"The rumours pushed up prices, but so far there has been no substance behind it," said Wood Mackenzie analyst Farid Ahmed. "Demand for replacement batteries in the U.S. has been white hot and also strong in Europe."

Wood Mackenzie expects demand for lead for replacement car batteries to rise 5.9% from 2020 to 6.5 million tonnes this year, back to pre-pandemic levels, Ahmed said.

This jump in demand coupled with transport delays has boosted U.S. lead premiums, which are paid top of benchmark LME prices in the physical market, to a record high of $375 a tonne .

Robust demand and resulting shortages have also triggered draws on stocks in warehouses registered with the London Metal Exchange (LME) , the world's biggest exchange for visible lead stocks. Those stocks are down more than 40% this year at 72,250 tonnes.

In the first four months of the year, the global refined lead market was in a surplus of 19,000 tonnes, compared with 30,000 tonnes in the same period last year, data from the International Zinc and Lead Study Group showed.

Part of the reason behind shortages is tight concentrate supplies. This can be seen in treatment charges paid by miners to process concentrate into refined metal, dropping to their lowest since September 2019 at $50 a tonne this month, according to an assessment by Asia Metals.