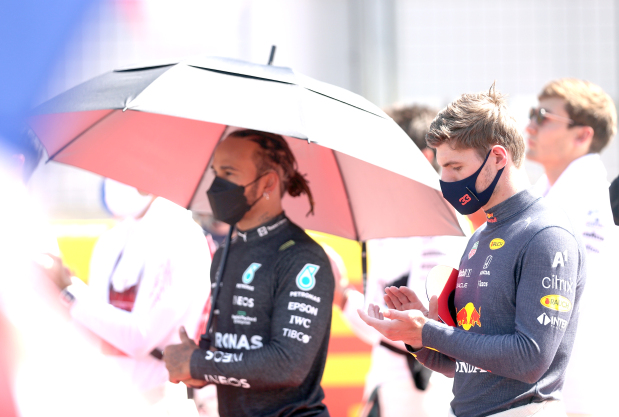 LONDON: Formula One’s motorsport head Ross Brawn has urged Max Verstappen and Lewis Hamilton not to let their title battle boil over after the pair collided in Sunday’s British Grand Prix at Silverstone.

The first lap clash sent Red Bull’s Verstappen crashing out, and on to hospital for checks, while Hamilton fought back from a 10 second penalty to win for Mercedes and slash the gap at the top to eight points.

The afternoon ended in argument and accusation, with Hamilton also subjected to racial abuse on social media channels.

“As is always the case in these matters, there will be a wide range of opinions on the rights and wrongs,” said Brawn in a column for the official Formula One website yesterday.

“What is clear is that we were robbed of a thrilling battle and nobody wants the championship decided on crashes and penalties.

“I hope we can avoid those incidents in the future because I think we were denied a fantastic battle today.”

For some, what happened was an accident waiting to happen and also a game-changer that has lit a fuse under a title tussle between the sport’s most successful driver and his heir apparent.

McLaren boss Zak Brown said already in May that he felt it was “a matter of time” before both tangled into the first corner and neither came out.

It took until turn nine at Silverstone, and it was only Verstappen that did not continue, but the point was made.

Hamilton, the seven-times world champion and now winner of his home race a record-extending eight times, showed that when push comes to shove he is not prepared to back down.

“I think this year he (Verstappen) has been very aggressive and most of the times I’ve had to concede and just avoid incident with him and live to fight on later in the race,” said the 36-year-old Briton.

“Once he’s out in the clear, they’re too fast so when an opportunity comes, I’ve got to try and take it. That’s what we’re out there doing.”

What happened on Sunday followed a pattern in close title battles – reminiscent of the elbows-out duels of old between Ayrton Senna and Alain Prost or more recently Hamilton v Nico Rosberg.

Hamilton and Verstappen had been complimentary enough about each other early in the campaign but the tone is different after 10 races.

Hamilton and Mercedes highlighted Verstappen’s ‘aggressive’ driving while Red Bull accused the Briton of a dangerous and desperate move.

The bigger picture is that the heat has been turned up, the battle lines are drawn and things are likely to get a lot more lively.

Hamilton hoped they could still find “the best balance” and give each other “space and respect... so that we can continue racing and have good races without colliding”, but that may be wishful thinking.

History shows that the more there is at stake, the more tempers are likely to rise and rivalries boil over.

Hamilton wants that record eighth title, one more than Michael Schumacher, and Dutch 23-year-old Verstappen wants to be his country’s first champion.

Neither are about to blink or flinch, two of the most mentally tough and determined drivers in a battle all of their own.