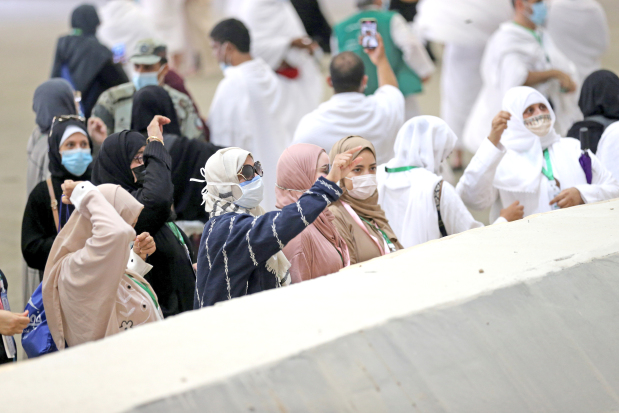 Pilgrims throw stones at the giant wall, which represents the devil, in Mina

The pilgrims began arriving in Mina early to partake in one of the final rituals of Haj. At Mina, Muslims must hurl the small pebbles and stones they received from Muzdalifah the night before at a giant wall, which represents the devil.

Usually, pilgrims collect the stones and pebbles themselves in Muzdalifah. However, as a preventive measure, they each received a bag of sterilised pebbles to ensure that they do not come into contact with any infections.

Yellow markings were placed on the floor surrounding the wall to ensure that the pilgrims maintain a two-metre distance between one another.

Haj, which usually welcomes more than 2.5 million Muslims from around the world, has been pulled back for the second consecutive year due to the coronavirus pandemic.

Only 60,000 vaccinated citizens and residents of Saudi Arabia have been allowed to perform the ritual.

In a speech marking Eid Al Adha, Custodian of the Two Holy Mosques King Salman bin Abdulaziz Al Saud lauded measures taken by the kingdom to ensure a safe Haj “in the shadow of this pandemic” including deploying technology to allow physical distancing.