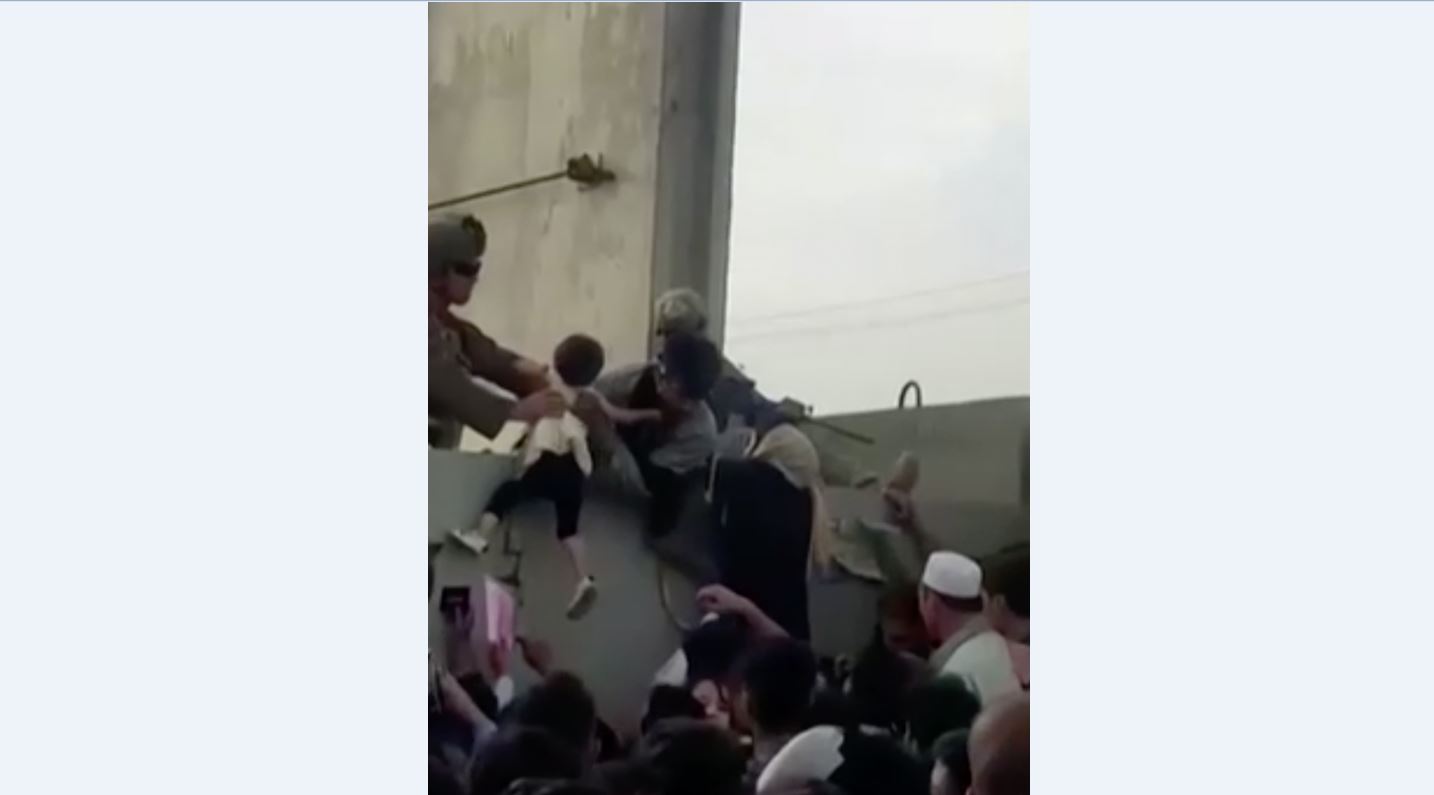 A screenshot from the video

From the surging crowd of people outside Kabul airport, a small girl is lifted up over the high perimeter wall and passed into the hands of an American soldier.

The moment this week, filmed and shared on social media, captures the sense of desperation among many Afghans who are fearful of what the Taliban's sudden return to power will mean.

Thousands of people have been trying to get to Kabul airport and on to military and civilian flights abroad, but amid chaotic scenes, some have been killed or wounded and armed Taliban members have been firing in the air to control the crowds.

The horror at Kabul airport continues - gut-wrenching scenes of a toddler being passed through the crowd to an American soldier behind a wall #Afghanistan pic.twitter.com/jsLXGWdYUN

American soldiers are also stationed there to prevent the airport from being overrun while evacuations of foreigners and Afghans are ongoing.

Meanwhile, the US military is completing its withdrawal from Afghanistan after 20 years of fighting, coinciding with the Taliban's lightning conquest of the country.

It is not clear whether the girl was being reunited with her family within the airport premises or simply handed over to others in an attempt to get her on board a flight out of Afghanistan.

In a separate clip, also filmed from the crush of the crowd of several hundred people, a woman clambers over the wall.

Since seizing the capital Kabul on Sunday, Taliban officials have sought to reassure Afghans and foreign powers that they will not seek revenge on former enemies and will respect the rights of women and girls within the framework of Islamic law.

Some Afghans are sceptical.

When the Taliban last ruled the country from 1996 to 2001, girls were not allowed to attend school, women could not work and they had to wear all-encompassing burqas and be accompanied by a male relative if they wanted to venture out.

Those who broke the rules could be humiliated and subjected to public beatings by the Taliban's religious police.

The scenes at Kabul airport this week have focused the world's attention on whether outside countries have a duty to accept Afghans who are fleeing because of fear of persecution.

Hundreds have landed at airports across Europe and beyond, but many more are stuck.

When asked about the footage of the child, Defence Minister Ben Wallace said Britain was unable to evacuate unaccompanied children from Afghanistan, although he understood that the girl was being flown out with her family.

"We can't just take a minor on their own," Wallace told Sky News.