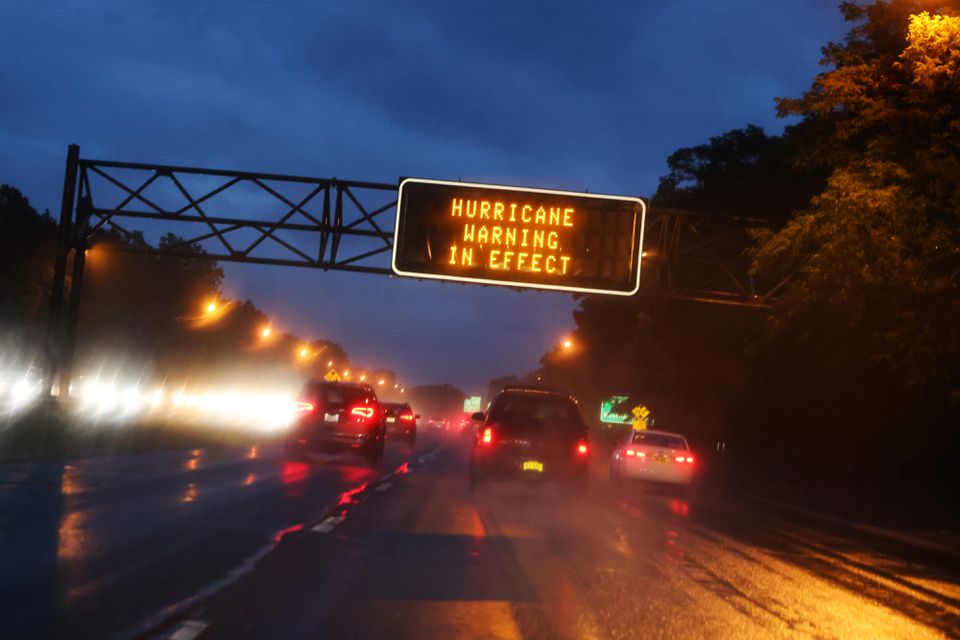 It was carrying top sustained winds of 75 mph (120 kph) and heading north. Henri was expected to hit Long Island or southern New England later on Sunday, hitting land at or near hurricane strength, the center said.

More than 42 million people in the region were under a hurricane or tropical storm warning on Saturday, the NHC said.

The center warned that Henri could produce storm surges - when ocean waters are pushed above their normal level - of 3 to 5 feet (1 to 1.5 meters) in some areas, as well as bringing drenching rainfall.

Parts of Long Island and New Haven, Connecticut, were under hurricane and storm surge warnings. Other parts of New England, such as Martha's Vineyard and Nantucket, were under surge and tropical storm watches and warnings.

New York City, the largest city in the United States, was under a tropical storm warning. In a Twitter post on Saturday, Mayor Bill de Blasio urged residents to stay home on Sunday and to use public transport if they need to travel.

"Secure outdoor objects and make sure you are in a safe location before the onset of wind and rain!," New York City Emergency Management Commissioner John Scrivani wrote in a tweet on Saturday.

At the IGA supermarket, shelves were stripped bare of toilet paper, paper towels and other supplies. Motorists waited in long lines at gas stations while stores ran out of flashlights.

Michael Cinque, the owner of the Amagansett Wine & Spirit, deliberated whether to board up the windows of his store as shoppers streamed in and left with bottles of tequila, vodka and expensive liquors.

"You always have to be prepared," said Cinque, who has owned the store for 42 years and also volunteers as an emergency responder. "You have to take it seriously."

Officials on Fire Island off the south coast of Long Island told residents and visitors to leave or face the potential of getting stuck on the island.

In Newport, Rhode Island, a coastal yachting community of 25,000 people, sump pumps, flashlights and generators were also in high demand.

Eversource, the largest electric utility company in Connecticut, warned residents to be prepared for power outages for up to five to 10 days.

Several airlines issued travel alerts and were offering vouchers for tickets on flights in and out of the region over the weekend. The Long Island Rail Road and Metro-North