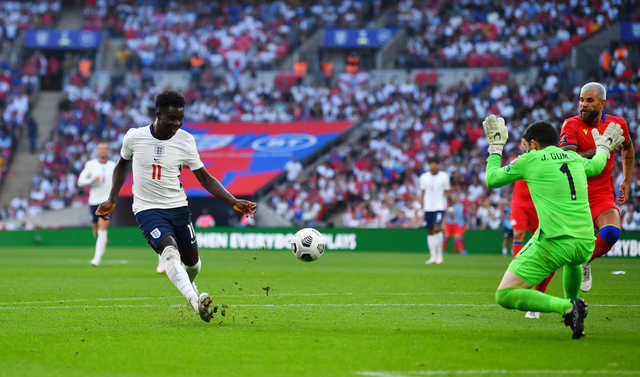 LONDON - Bukayo Saka's penalty miss against Italy in July's Euro 2020 final produced collective groans and some diabolical racist abuse but his return to Wembley on Sunday ended with a beaming smile and rapturous applause from England's fans.

England's 4-0 victory over tiny Andorra in their World Cup Group I qualifier was a largely forgettable affair for the sizeable crowd enjoying some late summer sunshine.

Jesse Lingard's double, his first England goals for three years, grabbed the headlines as Gareth Southgate made 11 changes to the side that beat Hungary 4-0 in midweek.

But the biggest cheers from a laid-back crowd that spent part of the evening making and throwing paper aeroplanes, were for Saka who headed in England's fourth goal -- a fine way for the Arsenal youngster to mark his 20th birthday.

Saka's spot-kick miss at the end of a nauseatingly-tense final against Italy on a stormy and often unpleasant day in the capital, was a traumatic moment for any player, let alone one so young. Trolls polluted the social media channels with racist abuse aimed at Saka and England's other Black players.

But from the moment Saka was given an ovation by the Wembley crowd before kickoff it was clear that this would be a far more pleasant experience for the attacking midfielder.

His headed goal produced the biggest roar of the night and he was serenaded at fulltime -- Saka responding by handing his shirt to a young fan in the stands.

"It means a lot, it really made a difference for me," Saka said. "It means everything to me and shows that everyone supports me through thick and thin."

His manager Gareth Southgate was pleased with Saka's "fabulous reception".

"It was lovely, you can see how popular he is with the team as well," Southgate told ITV.

"I hope (it offers) closure if it was needed but I don't think there is a player in that dressing room who thinks anything but positively about what he did all summer."

England's win maintained their 100% start to Group I of which they are now commanding leaders.

It was a rather frustrating night, however, as 134th ranked Andorra, whose entire population could easily fit into Wembley with room to spare, spent the entire evening with 11 men behind the ball -- an entirely understandable tactic.

After Lingard had opened the scoring after 18 minutes, England actually had to wait until the 72nd minute to double their lead as Harry Kane, on as a substitute with Mason Mount and Jack Grealish, slotted home a penalty.

Those substitutions enlivened England's display and they will no doubt all be back in the starting line-up for Wednesday's far tougher test away to Poland.

"It was difficult for the players picked who didn't have as much games together," Southgate said. "You have to keep moving the ball, keep being patient. It wasn't an easy task."