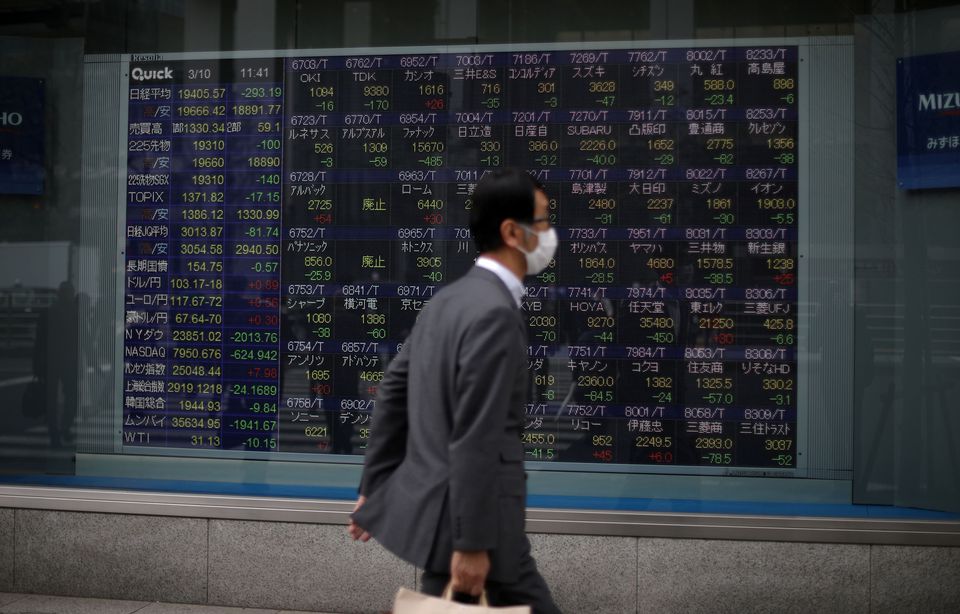 A man wearing protective face mask, following an outbreak of the coronavirus disease (Covid-19), walks in front of a stock quotation board outside a brokerage in Tokyo, Japan, March 10, 2020. REUTERS/Stoyan Nenov

Asian shares dropped Thursday, while the dollar held firm, in line with a cautious global mood as investors worried about the combination of slowing global growth and the potential tapering of central bank stimulus.

The European Central Bank is particularly in focus, with analysts expecting it to announce a token step towards reducing its emergency economic support later on Thursday.

The Hang Seng Tech Index fell 2.44% in early trading, weighed by declines in Tencent Holdings down 3.7% and Netease Inc down over 7% after China's government on Wednesday summoned gaming firms to ensure they implement new rules for the sector.

Edison Pun, a senior market analyst at Saxo Markets, attributed the bearish global turn to strong US job openings data overnight, which "means the job market is still strong, and that could mean tapering may still start in (the fourth quarter) despite the poor non-farm payroll in August," he said.

Earlier this week, investors had bet the lower-than-expected payroll reading from Friday would mean the Federal Reserve would delay trimming its massive asset purchases, sending MSCI's world equity index to a new all time on Tuesday.

However, the mood has turned more cautious since then, and several Fed policymakers on Wednesday signalled the US central bank remains on track to reduce asset purchases this year.

Following its meeting on Thursday, analysts expect the ECB to announce a cut to the pace of its emergency bond purchases from next quarter but will keep buying bonds at least until 2024 under its main programme, and possibly much longer.

Ahead of the decision, the euro slipped to $1.1814 , a little off Friday's two-month high of $1.1909, while the dollar was steady against a basket of its peers , having
gained in the previous three sessions.

Benchmark 10-year Treasury notes yielded 1.3376%, little changed in Asian hours, having edged lower on Wednesday after a strong auction by the US Treasury.

Oil prices ticked lower, giving up some of last session's gains although a slow recovery in production in the US Gulf of Mexico output following Hurricane Ida offered some support.