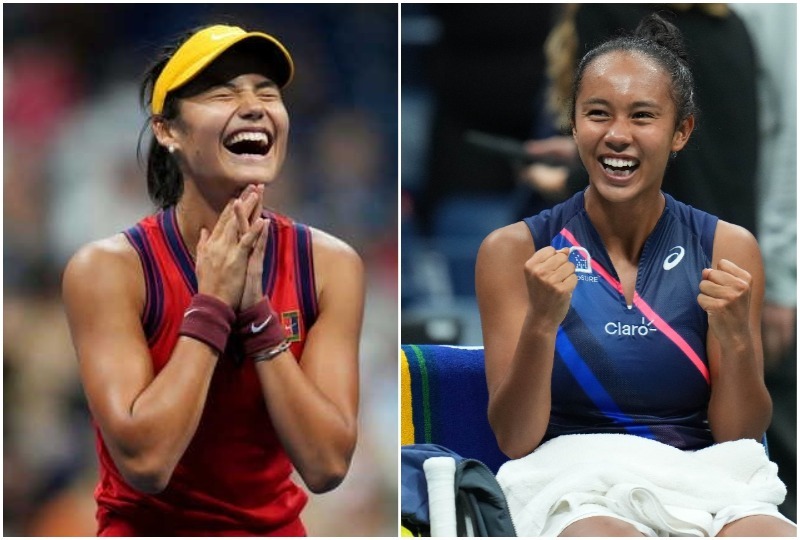 Emma Raducanu of Great Britain and Leylah Fernandez of Canada

NEW YORK: Win or lose in Saturday's US Open final, teen sensations Emma Raducanu and Leylah Fernandez have already cemented their star power after announcing themselves on the big stage at Flushing Meadows.

The two unseeded players were virtually unknown quantities this year but Fernandez -- who turned 19 this week -- beat three top-five seeds along the way while Raducanu became the first qualifier to reach the final of a tennis Grand Slam.

The Duke and Duchess of Cambridge and Prime Minister Boris Johnson heaped praise on Raducanu as she defeated 17th seed Maria Sakkari in the semi-final to reach the final without dropping a set at the tournament.

"What an incredible achievement at this year's #USOpen @EmmaRaducanu!" the royals wrote on Twitter on Friday. "We will all be rooting for you tomorrow. Wishing you the best of luck!"

The 18-year-old played only four WTA tournaments before the U.S. Open and the soon-to-be British number one has become the country's biggest star in the process.

"Well done @EmmaRaducanu for a brilliant win at the #USOpen. The whole country will be cheering you on in the final," wrote Johnson.

Raducanu has transformed the year's final major into one of the most compelling in memory, as she now has the chance to become the first British woman to win a Grand Slam since Virginia Wade won Wimbledon in 1977.

Her run prompted applause from around the sports world, with former England soccer international Gary Lineker and striker Marcus Rashford saluting her achievement.

"A US Open final at 18 years old and a qualifier to boot. Wow! Well played," Lineker said on Twitter.

"What an achievement already!! Good luck this weekend," wrote Rashford. "We're all cheering you on back home."

Fernandez has heavyweights rooting for her in her own corner too, with Canadian Prime Minister Justin Trudeau taking the time to watch her play before an important election debate.

"We've got a Canadian in the #USOpen final! Caught the start of the match before heading to the debate and I just want to say congratulations, @leylahfernandez - and good luck in the final," he wrote on Twitter.

Former NBA champion Magic Johnson described Fernandez as a "giant slayer" after she toppled second seed Aryna Sabalenka in the semis, one of many major scalps in a blazing run that also left defending champion Naomi Osaka by the wayside.

Fernandez also received a word of advice from Canada's ice hockey captain and three-times Olympic medallist Marie-Philip Poulin, who called her an "inspiration".

"The entire country is behind you," she wrote. "Make sure to have that maple syrup before the final!"