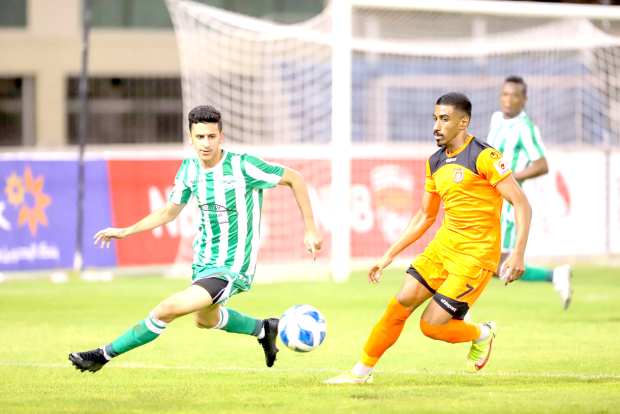 Al Hala and Budaiya players vie for the ball

Jefferson Dos Santos scored an injury-time penalty to help Al Hala defeat Budaiya 2-1 and claim their first victory of the season in the third round of the Nasser bin Hamad Premier League last night.

Abdulla Al Hashash took Budaiya ahead in the second minute of the match but Hala levelled 20 minutes later through Ibrahim Al Obaidly.

After last night’s victory Hala are third on five points while Budaiya are at the bottom of the standings with just one point.

Riffa are fourth on five points from one victory and two draws while East Riffa claimed the fifth spot with four points from a win and a draw.

The third round matches started on Thursday when Al Najma scored a last-minute goal to edge Al Hidd 2-1 and Manama were held to a 1-1 draw by Al Ahli.

The third-round match between Muharraq and Al Khalidiya has been postponed.