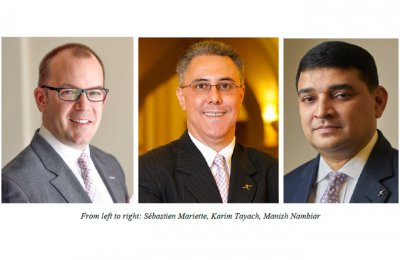 Mariette, Tayach and Nambiar. Image: Kempinski Hotels
Kempenski Hotles has appointed three seasoned hoteliers as Area General Managers to oversee a number of the group‘s luxurious hotels in the Middle East & Africa region.
Sébastien Mariette, Karim Tayach and Manish Nambiar are the new appointees ad they will, at the same time, keep the responsibility for their own hotels as general managers.
"Given the ever-changing landscape of our industry, this enhanced and very effective new operational structure allows us to be as close as possible to our hotels and owners in the region and gives us the right framework to remain a flexible and agile business partner that adapts and responds effectively and rapidly to the demand," explains Bernold Schroeder, Chief Executive Officer ad interim and Chairman of the Kempinski Hotels Management Board.
Sébastien Mariette, the new Area General Manager Levant, started his journey with Kempinski in 2007 and occupied several leadership roles within various parts of the world including Cluster General Manager at the Kempinski Hotel Ishtar Dead Sea and Kempinski Hotel Aqaba in Jordan, Managing Director at The Capitol Kempinski Hotel Singapore as well as Area General Manager Egypt. Bulgaria, Djibouti, China and the UAE were also stations in his Kempinski career over the past 14 years.
Mariette holds a Master’s Degree as well as a Master of Business Administration in International Hospitality Management which he passed with distinction. As the Area General Manager Levant he oversees from now on the three Kempinski hotels in Jordan as well as the Kempinski Summerland Hotel & Resort Beirut, Lebanon.
Coming from a successful hotelier familier, Karim Tayach brings a wealth of experience and expertise to his new position. Based in Qatar, he will not only look after Marsa Malaz Kempinski, The Pearl as well as Kempinski Residences & Suites in Doha, but also of  Kempinski Hotel Muscat in Oman as well as Kempinski Al Othman Hotel in Al Khobar, Saudi Arabia.
Tayach has been in the luxury hotel industry for more than 27 years and started his journey as a corporate management trainee at the Hyatt Regency Makkah in Saudi Arabia. He then climbed the career ladder from food and beverage roles within the Ritz Carlton Hotels in Dubai, Doha and Jakarta until he took it to the next level and became General Manager at the Ritz Carlton Jakarta Pacific Place in 2007 followed by an assignment as General Manager at the Ritz Carlton Bali in 2013. Karim is a Tunisian-German national who speaks fluent English, German, Italian, in addition to his Arabic and French mother tongues.
A well known expert in the luxury hotel industry in Africa, Manish Nambiar is the new Area General Manager in charge of this region for Kempinski Hotels. He joined the company in 2004 as Regional Executive Chef and held several leadership roles such as the hotel manager in Kempinski Soma Bay in Egypt or the Kempinski Hotel Delhi in India. As he progressed in his career over the last 17 years, he was appointed Cluster General Manager of Kempinski Kenya and subsequently the General Manager of Kempinski Hotel Gold Coast City, Accra in Ghana, where he successfully positioned the hotel as the market leader.
Nambiar completed his hospitality studies at the Indian Institute of Hotel Management and European Executive MBA from Reims Management School. A part from his general manager position in Accra, he now oversees in his new role Villa Rosa Kempinski Nairobi and Olare Mara Kempinski Masai Mara in Kenya, Djibouti Palace Kempinski, Kempinski Seychelles Resort as well as three hotels in Egypt, Kempinski Nile Hotel and Royal Maxim Palace Kempinski in Cairo and Kempinski Hotel Soma Bay. - TradeArabia News Service