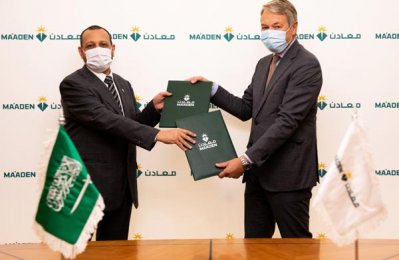 Saudi Arabian Mining Company (Ma’aden) has signed agreements with leading European shipping management groups Thenamaris LNG and Exmar Marine NV to hire a total of 4 vessels to transport ammonia produced by the group.
The signing ceremony of the agreements took place during the annual International Fertilizer Association conference held in Lisbon, Portugal.
Both shipping agreements are due to take effect in the first quarter of 2022. With these agreements Ma’aden will grow its Ammonia maritime transport fleet to 7 vessels, with an annual shipping capacity of around 2 million tonnes.
Its mine-to-market phosphate business consists of three mega production plants in Saudi Arabia: Wa’ad Al Shamal Industrial Minerals City in the North, another at Ras Al Khair Industrial City East which is a phosphate and bauxite processing super-hub; and the Phosphate 3 expansion, which will add over 1 million tonnes ammonia production—to reach 3.3 million tonnes— and 3 million tonnes of phosphate fertilizer production capacity to Ma’aden’s portfolio, bringing that to a total production capacity of more than 9 million tonnes per year.
Commenting on the deal, Ma’aden CEO Abdulaziz Al Harbi said: "We started ammonia exports with just one ship back in 2016 and these new chartering agreements will strengthen our global logistics network and enable Ma’aden to serve its customers faster."
"Ma’aden’s ammonia business is an integral part of our broader phosphate production portfolio, and I am pleased to say that we are on track to start production at our third ammonia plant in Ras Al Khair Industrial-City in the first quarter of 2022," he stated.
Since its IPO in 2008, Ma’aden has built one of the world’s largest mine-to-market manufacturing value chains of diversified ammonium phosphate fertilizer products. Ma’aden today supplies over 30 markets worldwide.
Ma’aden has - in a record time - become the leading multi-commodity company for the development of the Saudi mining and minerals industry, the third pillar of Saudi industry, and among the fifteen largest global mining companies.
It is a key driver of Saudi Arabia's position as one of the top 3 global producers and exporters of phosphate fertilizers and a key player in the stability of global food security.-TradeArabia News Service