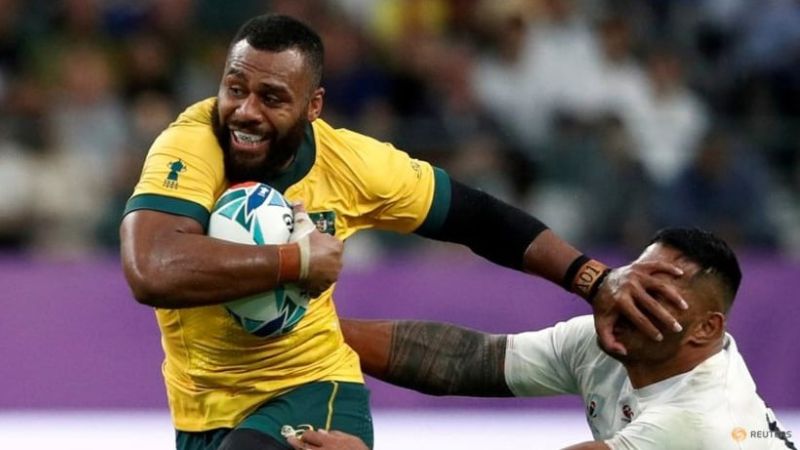 Samu Kerevi's involvement in Australia's northern hemisphere tour next month is in doubt after the centre limped off with an ankle injury during the Wallabies' 32-17 win over Argentina in the Rugby Championship on Saturday.

The 28-year-old was among the Australian try scorers before going off in the second half on the Gold Coast as Dave Rennie's side continued their uptick in form with a fourth win in a row.

"Obviously there are question marks around Samu," said Rennie, who will announce his squad for the tour later in the week.

"There will be a few bumps and bruises that will present themselves, so we'll have a look at that and get confirmation around what the squad looks like."

Saturday's win was the second straight victory over the Pumas for Rennie's team, who also notched up back-to-back wins over South Africa as the Wallabies finally found form after several disappointing performances earlier in the year.

The Australian players will now recuperate before setting out on a month-long tour, which will see them play Japan in Oita on Oct. 23 ahead of clashes with Scotland at Murrayfield on Nov. 7 and England six days later at Twickenham.

The Wallabies will conclude their tour against Wales in Cardiff on Nov. 20. Michael Hooper is relishing the challenge with less than two years to go to the Rugby World Cup in France.

"It's a great opportunity for us," said the Wallabies captain. "A lot of our guys haven't been up north.

"We've got a World Cup there in two years, so if we have the opportunity to go up there and play in front of full stadiums it's going to be great for our growth, great for playing a couple of different teams, and European teams at that.

"We're pretty keen to get up there. We've got Japan in there, who play a different style of rugby again, very dangerous in what they can do on the park, they really move the ball well.