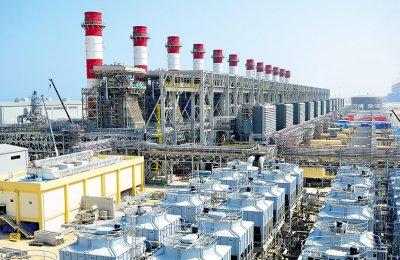 Saudi Water Partnerships Company (SWPC) has announced the financial close for its Jubail-3B Independent Water Plant (IWP) with the participation of its partners from the relevant authorities such as the supervisory committee at the Ministry of Environment, Water and Agriculture, developers and consultants.
Located 65 km north of Dammam airport in Saudi Arabia, the Jubail 3B IWP plant will produce 570,000 cu m per day of potable water through reverse osmosis technology to supply the Riyadh and Qassim regions.
It will also include a 60MWp capacity solar PV facility – the largest in-house solar capability for a desalination plant in the kingdom – to help trim the cost of electricity per cu m.
The project, which is estimated to cost SR2.6 billion ($692 million), will be implemented on a build, own, operate (BOO) model by the private sector for a period of 25 years from the date of commercial operation.
Earlier this year in June, SWPC had reached the project's commercial close with a consortium led by French energy giant Engie along with its Saudi partners Nesma Company and Abdulaziz Al Ajlan Sons for Commercial and Real Estate Investment Company.
Confirming the financial close, CEO Engineer Khalid Al Quraishi said that it was indeed a major milestone for the company to achieve this amid the challenging conditions caused by the pandemic (Covid-19).
"Despite the fluctuations, liquidity crises and changing global market conditions, the Saudi Water Partnerships Company succeeded in completing the financial closure in close cooperation with the consortium and the group of lenders," stated Al Quraishi.
In August TradeArabia had reported that Spanish infrastructure major Acciona has secured the main contract worth €337 million ($398 million) for the Jubail 3B project. It is set for commercial operations in 2024.
The SWPC chief said this successful financial close indicated the company’s efforts to provide full support for investment projects, and to enhance private sector participation in sustainable development by providing the opportunity for local and foreign investors to participate in the implementation of these projects.
This comes in line with our efforts to boost sustainable development, provide job opportunities for young people, and support local content and balanced development, in order to achieve the strategic objectives contained in “Saudi Arabia’s vision 2030” and the initiatives approved by the Saudi Council of Ministers to encourage private sector participation in economic development initiatives," he added.-TradeArabia News Service