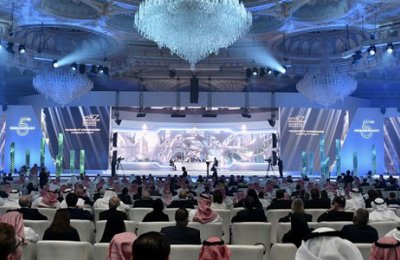 Sabic at FII
Sabic has outlined plans to achieve carbon neutrality from global operations including reducing the carbon footprint of its cracker at Teesside, UK by up to 60% in phase one, making it one of the world’s lowest carbon-emitting crackers.
In the second phase, a carbon neutrality feasibility study will be undertaken via use of hydrogen as a fuel source, Sabic said attending the fifth Future Investment Initiative (FII) where it is a strategic partner. Sabic has total investment in UK around 1 billion pounds ($1.37 billion).
Sabic is already contributing to the Circular Carbon Economy through a range of landmark developments, including plastic chemical recycling, renewable energy deployment and its operation of the world’s largest CO2 capture and purification plant in Jubail.
Earlier this year, the company also confirmed new collaborations aimed at developing and demonstrating solutions for electrically heated steam cracker furnaces; and establishing the world’s first large-scale chemical site to operate on 100% renewable power.
Earlier this week, at the Saudi Green Initiative conference in Riyadh, Saudi Crown Prince Mohammed Bin Salman had pledged to make Saudi Arabia carbon neutral by 2060.
Sabic Vice Chairman and CEO, Yousef Al-Benyan said: “The aspiring targets set by His Royal Highness provide the foundation for a brighter, more sustainable future. As Saudi Arabia transforms towards carbon neutrality, the ripple effects will deliver significant benefits for the rest of the world.
“Saudi Arabia’s ambition is already inspiring more countries and regions to step up. As a proud Saudi company and an industry leader, Sabic is pleased to share our innovative technologies and invest for the future.”
Now in its fifth edition, the three-day FII conference from October 25 in Riyadh gathered together global leaders from business, government, and investment to focus actions on the theme ‘Invest in Humanity’.
This year’s FII brought together more than 250 top international speakers and facilitated discussions revolving around the investments which can create the greatest benefits for humanity.
The conference included interactive summits on Investing in Education; Investing in the Metaverse; and Investing in Environmental, Social and Governance (ESG).
Sabic leadership also participated in a Saudi-UK Roundtable organised by the ministry of investment and led by Khaled Al-Faleh Saudi Investment Minister and Lord Grimstone UK Investment Minister.-- TradeArabia News Service