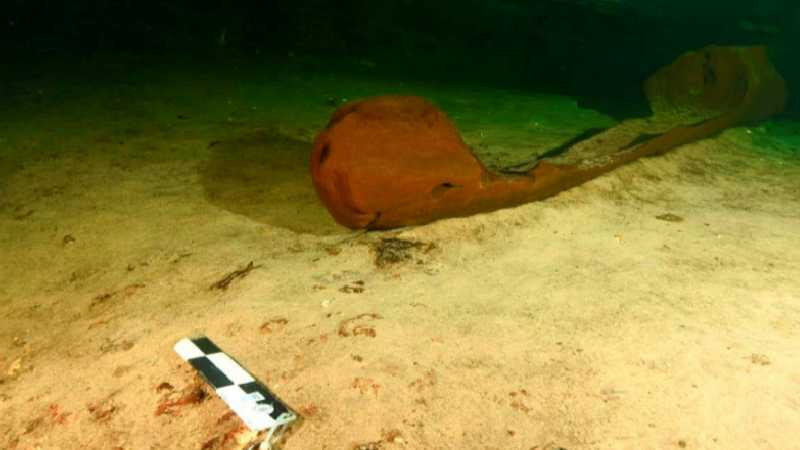 A wooden canoe used by the ancient Maya and believed to be over a thousand years old is pictured at a fresh-water pool known as a cenote and found during the archeological work accompanying the construction of a controversial new tourist train, in the state of Yucatan, in this handout released on October 29, 2021. Mexico's National Institute of Anthropology and History (INAH) via Reuters

A wooden canoe used by the ancient Maya and believed to be over 1,000 years old has turned up in southern Mexico, officials said on Friday, part of archeological work accompanying the construction of a major new tourist train.

The extremely rare canoe was found almost completely intact, submerged in a fresh-water pool known as a cenote, thousands of which dot Mexico's Yucatan peninsula, near the ruins of Chichen Itza, once a major Maya city featuring elaborately carved temples and towering pyramids.

Measuring a little over 5 feet (1.6 meters) in length and 2-1/2 feet (80 cm) wide, the canoe was possibly used to transport water from the cenote or deposit ritual offerings, according to a statement from Mexican antiquities institute INAH.

The institute described the extraordinary find as "the first complete canoe like this in the Maya area," adding that experts from Paris' Sorbonne University will help with an analysis of the well-preserved wood to pin-point its age and type.

A three-dimensional model of the canoe will also be commissioned, the statement added, to facilitate further study and allow for replicas to be made.

The canoe is tentatively dated to between 830-950 AD, near the end of the Maya civilization's classical zenith, when dozens of cities across present-day southern Mexico and Central America thrived amid major human achievements in math, writing and art.

It was found while workers building a tourist rail project championed by President Andres Manuel Lopez Obrador were inspecting the area surrounding the cenote which is near a section of the project that will connect with Cancun, Mexico's top beach resort.