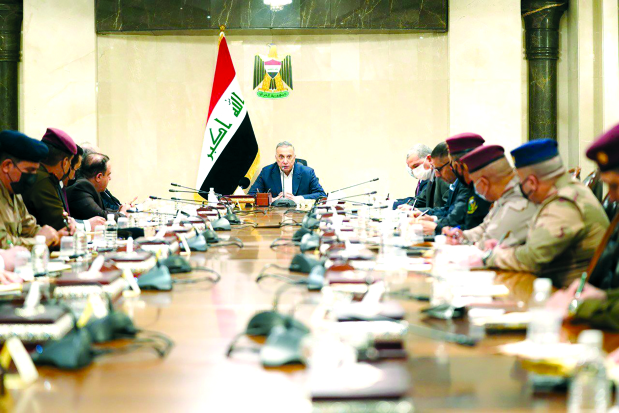 The Foreign Ministry stressed Bahrain’s support and solidarity with the government and people of Iraq against terrorism to ensure Iraq’s sovereignty and development.

The Iraqi prime minister escaped unharmed in the attack by armed drone in Baghdad, officials said, in an incident that raised tension in the country weeks after a general election disputed by Iran-backed militia groups.

Al Kadhimi appeared in a video footage chairing a meeting with top security commanders to discuss the drone attack.

“The cowardly terrorist attack that targeted the home of the prime minister with the aim of assassinating him, is a serious targeting of the Iraqi state by criminal armed groups,” his office said after the meeting.

Three drones were used in the attack, including two that were downed by security forces while a third drone hit the residence, state news agency INA said.

The US condemned the attack on Al Kadhimi, which it characterised as an “apparent act of terrorism.”

“We are relieved to learn the prime minister was unharmed. This apparent act of terrorism, which we strongly condemn, was directed at the heart of the Iraqi state,” State Department spokesman Ned Price said.

The United Nations Assistance Mission for Iraq also condemned in the “strongest terms the assassination attempt” against Al Kadhimi.

The UNAMI said: “Terrorism, violence and unlawful acts must not be allowed to undermine Iraq’s stability and derail its democratic process.”

UN secretary-general Antonio Guterres “strongly” condemned the attack and called on Iraqis “to exercise utmost restraint and reject all violence and any attempts to destabilise Iraq.”

The kingdom “affirms that it stands united by Iraq, its government, and its people in confronting all terrorists who are trying in vain to prevent Iraq from restoring its (role), consolidating its security and stability, and enhancing its prosperity and development,” a statement added.

France said it condemns “in the strongest terms” the assassination attempt and said it fully supports the democratic process in Iraq.