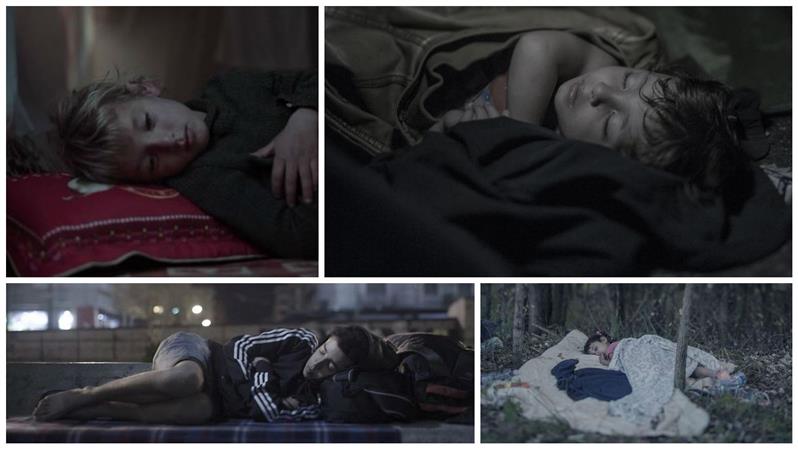 An estimated 2.5 million children have been forced from their homes in war-stricken Syria.

As the Syrian conflict refuses to end, one-in-three Syrian refugee children have never known anything but war and flight.

Swedish photojournalist Magnus Wennman, a two-time winner of the World Press Photo Award, decided to use his photography to raise awareness by portraying the realities and tragic consequences for the youngest and most vulnerable refugees.

“I came up with this idea that I wanted to document where the refugee children sleep,” said Wennman. “No matter how hard this conflict may be to understand, it’s not hard to understand that children need a safe place to sleep.”

In early 2015, Wennman traveled through seven countries in the Middle East and Europe where he met refugee children who showed him where they lay their heads at night.

The result is ‘Where the Children Sleep,’ which puts faces, names, and stories to the millions of refugee children who now spend the night in camps, in fields, outside closed borders, and on the side of the road now that their lives have been violently uprooted.

Wennman has partnered with UNHCR to display these photos in the United States to raise awareness about refugee children. 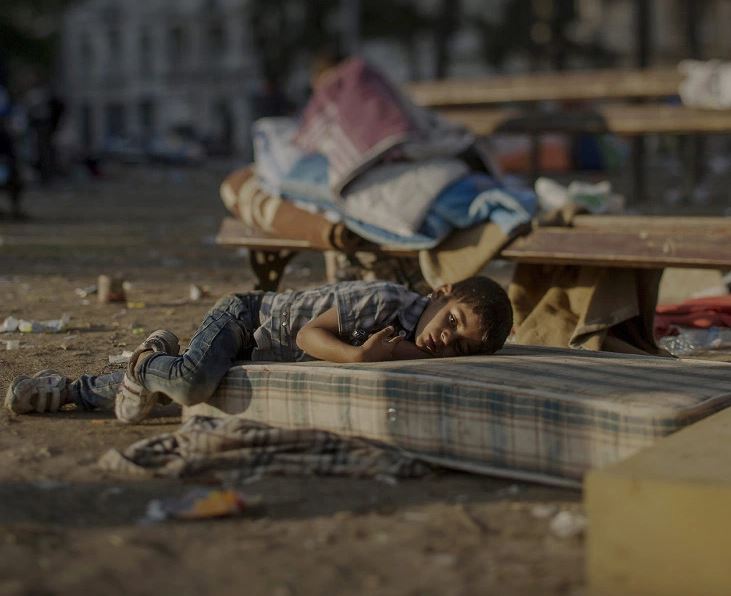 Abdulla sleeps on a filthy mattress outside a railway station in Belgrade, Serbia.

Since he saw the murder of his sister in Daraa, Abdullah has been in shock.

He has nightmares, he’s tired and not in good health because of a blood disorder – but his mother has no money for medicine. 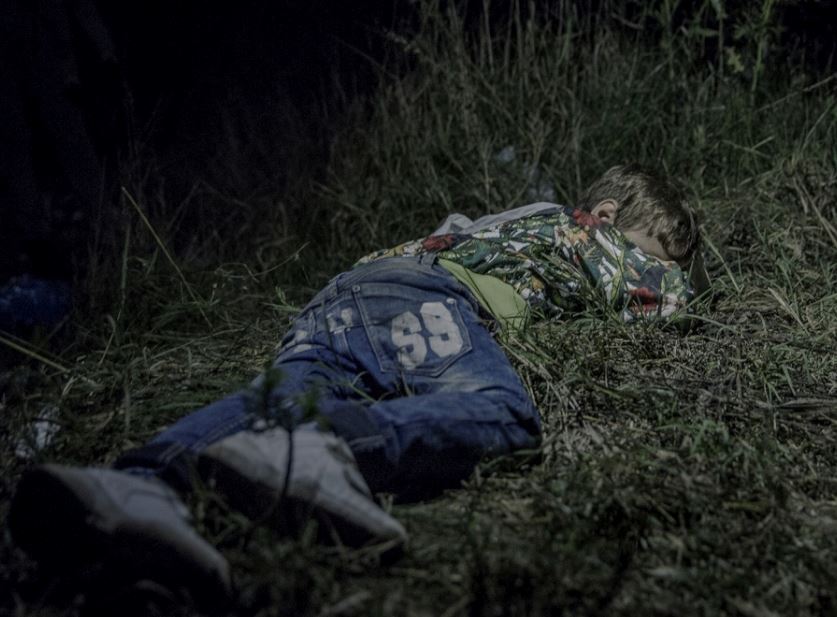 It is after midnight when Ahmed falls asleep in the grass.

The adults are still awake, formulating plans for how they will continue their journey through Hungary. Ahmed carries his own bag over the long stretches that his family walks by foot.

“He is brave and only cries sometimes in the evenings,” says his uncle, who has taken care of Ahmed since his father was killed in their hometown of Deir ez-Zor in northern Syria. 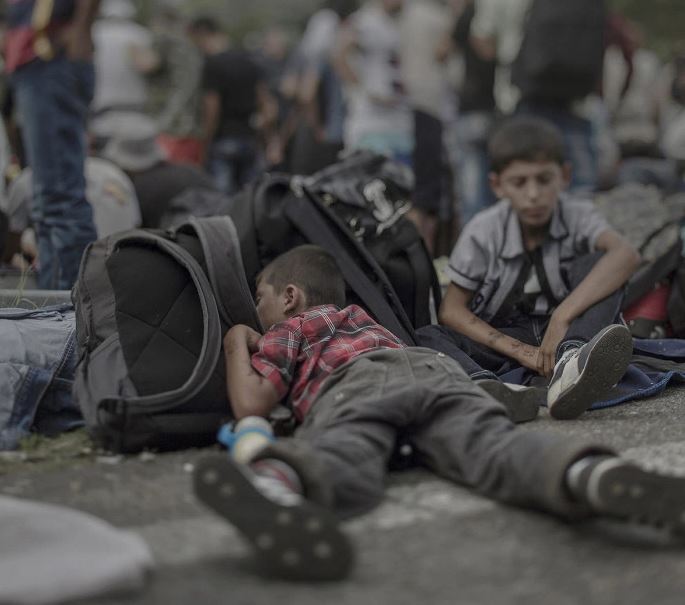 Ahmad was at home when a bomb hit his family home in Idlib, Syria.

Shrapnel hit him in the head but thankfully, he wasn’t injured that seriously. His brother wasn’t so lucky.

The family lived in a war zone for several years before fleeing to Horgos, in Hungary.

So far they’ve slept in bus shelters, on roads and in the woods. 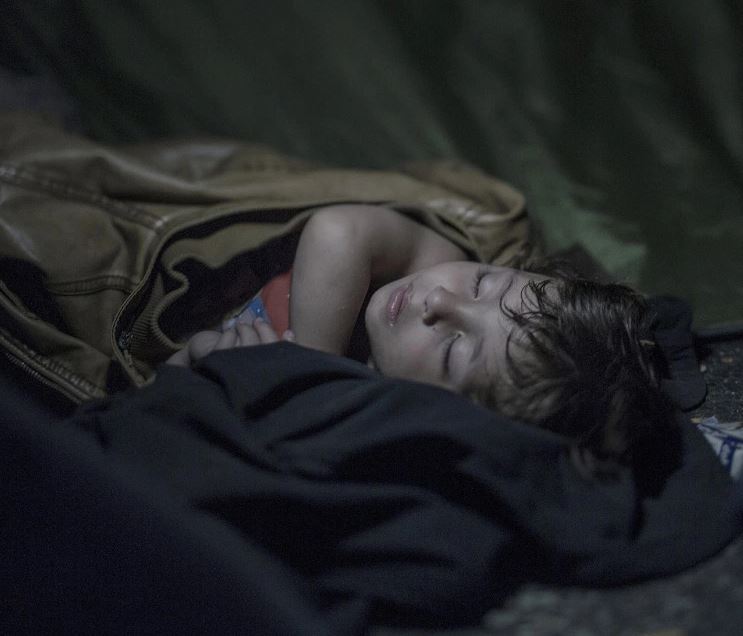 Mahdi is just 1.5-years-old, he sleeps on the ground in Horgos, Serbia.

His entire life has consisted of escaping war.

Mahdi manages to sleep soundly despite the refugees protesting around him. 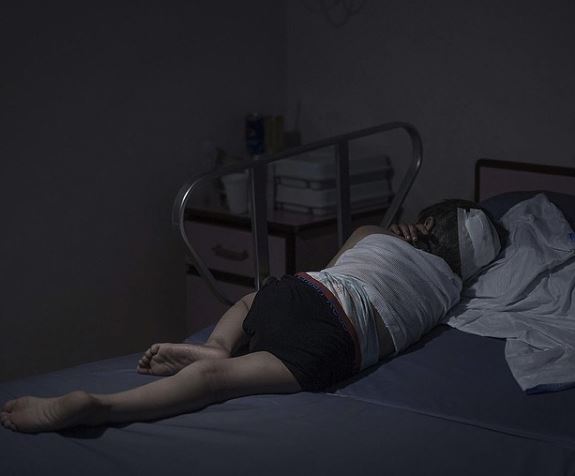 He and his mother wanted to bake a pie.

Hand in hand they went to the market in Daraa to by some flour.

They walked by a taxi, where someone had placed a bomb.

The boy, flown to Jordan, has shrapnel in his head, his back and his pelvis. 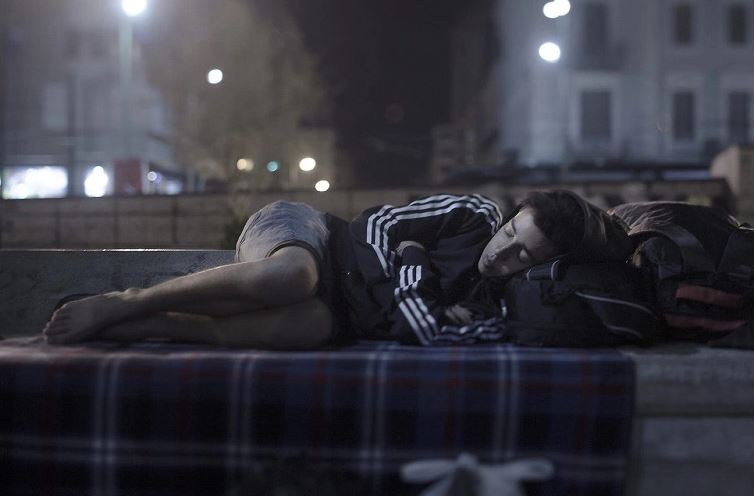 Hundreds of refugees arrive in Greece every day and smugglers exploit desperate people running from danger.

Abdul spent his last Euros on a ferry ticket and now he has no money left.

He is able to phone his mum in Syria every now and again by borrowing a phone – but he doesn’t dare tell her how bad his circumstances are.

‘She cries and is scared for my sake and I don’t want to worry her more,’ he said. 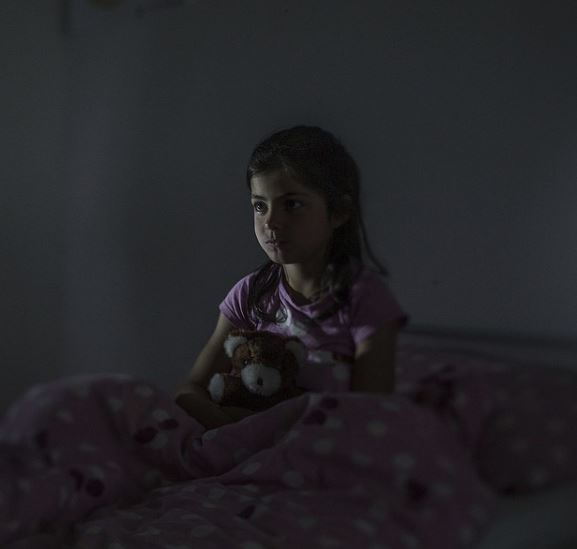 She is nine years old and lives in a rental apartment in Norberg, Sweden with her mother Malachi and two brothers.

Fatima is from Idlib in Syria.

At night she dreams that she falls of a boat in the middle of the ocean.

The same boat that smuggled them from Libya to the Italian coast a while ago. 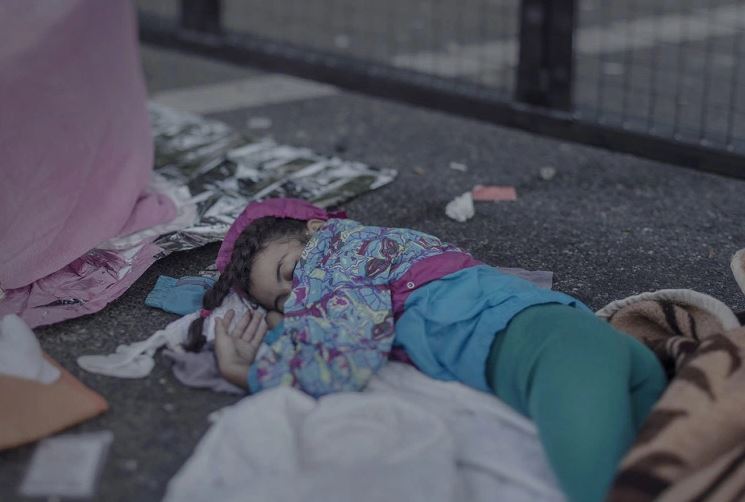 Shehd used to be playful, she especially loved to draw. But her mother soon noticed a common theme in her sketches: weapons.

‘She saw them all the time, they are everywhere.’

Shehd’s mum said she hasn’t drawn much since leaving Syria. She worries their escape has forced her to grow up too soon.

Shehd and her family now live on the Hungarian border.

They pick food from the nearby trees.

The family said if they’d known how difficult their journey would have been – they would have risked their lives to stay in Syria, despite Islamic State. 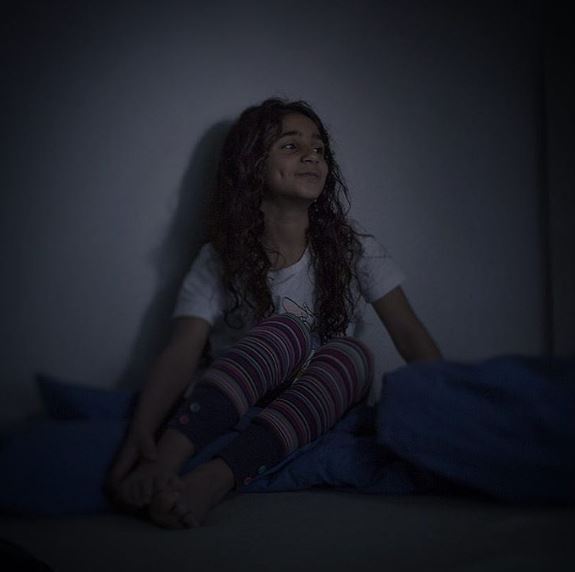 Leipzig, Germany. Back home in Aleppo, the Barbie dolls and the bed are left in the big red house. It’s them she misses most, Ahlam says.

The family fled from Syria via Turkey. The smugglers took 4,000 dollars to send the family with a small rubber boat across the Aegean Sea.

For eight hours, the overcrowded boat drifted towards land.

At Samos sharp rocks at what the Greeks call "Death Coast," the boat sank.

After many hours they were rescued by two Swedish rescue boats on location in Greece.

After a long journey through Europe, the whole family sits in a small room in a shabby building outside Leipzig.

When she grows up she wants to be a cop. "I'll catch all the bad guys," she says. 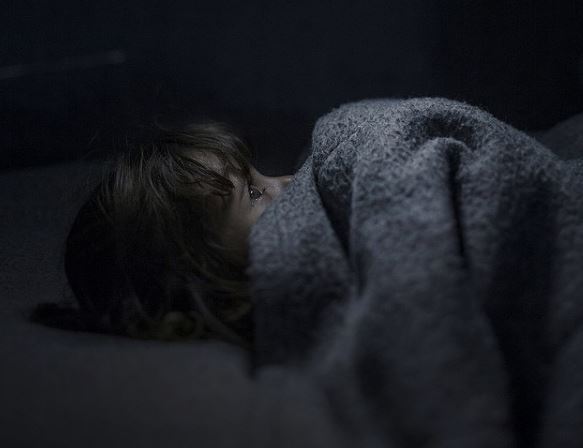 She loves football. Her father tries to make footballs of all the material he could find.

Every night when he says good night to Fara, and her older sister Tisam, 9, he hopes that they will wake up to a new day when they will get a real football to play with.

All other dreams feels unattainable for him. 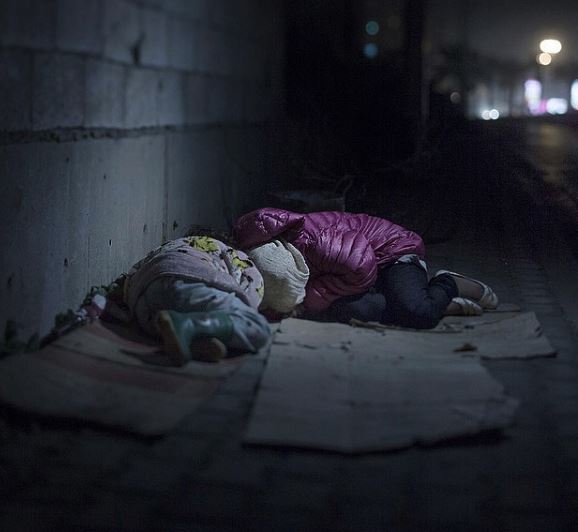 They live on the street in Beirut. They come from Damascus, where a grenade killed their mother and brother.

Together with their father, they have slept on the sidewalk for a year.

They are always close to each other. Rahaf says she is afraid of ‘bad boys’.

When she says it Ralia starts to cry. 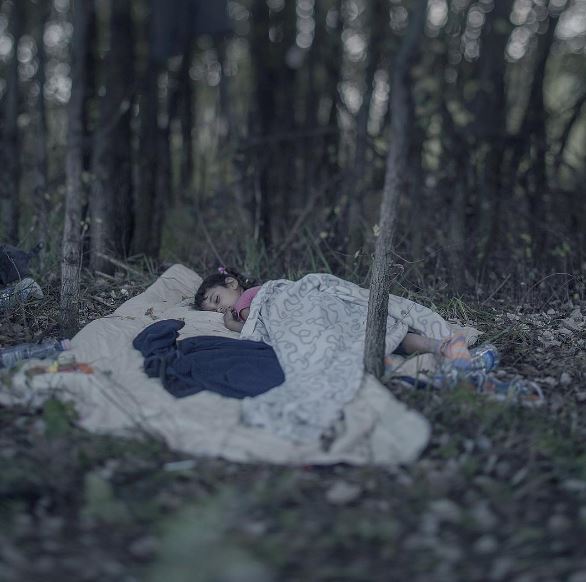 Back home in Baghdad, the dolls, the toy train, and the ball are left; Lamar often talks about these items when home is mentioned.

The bomb changed everything. The family was on its way to buy food when it was dropped close to their house.

It was not possible to live there anymore, says Lamar’s grandmother, Sara.

After two attempts to cross the sea from Turkey in a small, rubber boat, they succeeded in coming here to Hungary’s closed border.

Now Lamar sleeps on a blanket in the forest, scared, frozen, and sad. 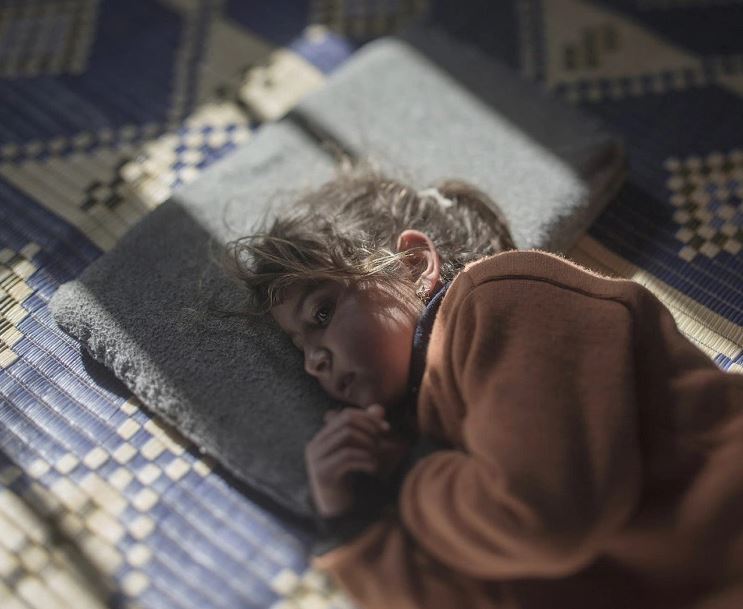 Tamam is only five, but she’s already spent two-years sleeping away from home.

She left her native Homs after air raids and now sleeps rough in Azraq, Jordan. 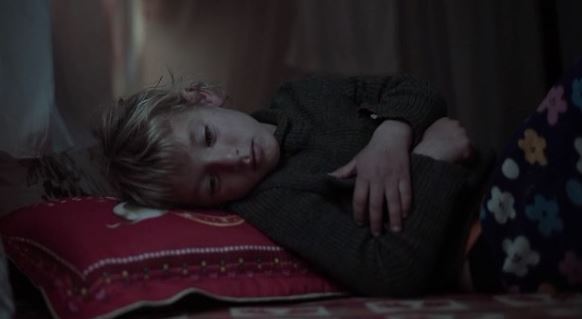 She wants to go home. She had her own room in Aleppo, she tells us. There, she never used to cry at bedtime.

Here, in the refugee camp, she cries every night.

Resting her head on the pillow is horrible, she says, because nighttime is horrible.

That was when the attacks happened.

By day, Walaa's mother often builds a little house of pillows, to teach her that they are nothing to be afraid of.