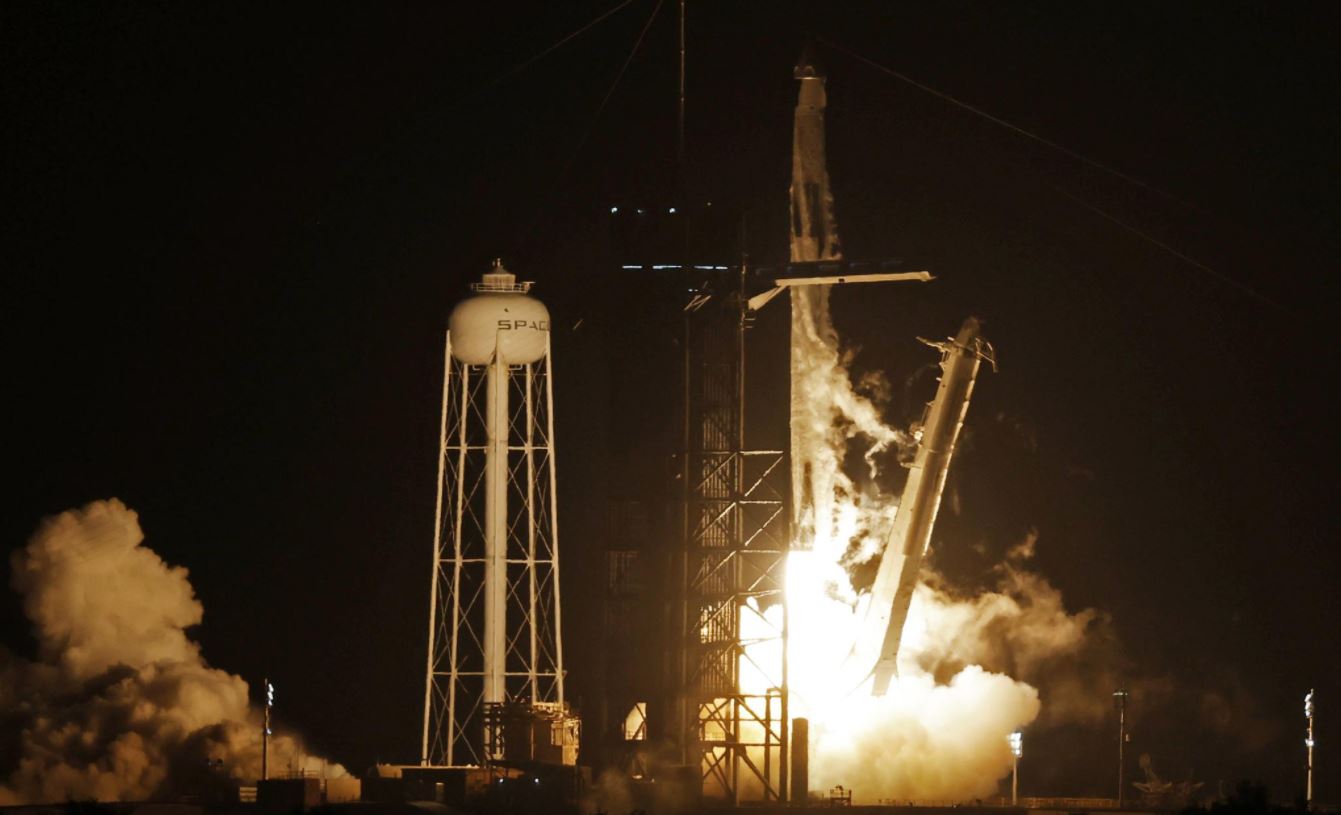 A SpaceX Falcon 9 rocket, with the Crew Dragon capsule, is launched carrying three NASA and one ESA astronauts on a mission to the International Space Station at the Kennedy Space Center in Cape Canaveral, Florida, U.S. November 10, 2021. REUTERS/Joe Skipper

The SpaceX-built launch vehicle, consisting of a Crew Dragon capsule and a two-stage Falcon 9 rocket, blasted off from NASA’s Kennedy Space Center in Florida at about 9 p.m. (0200 GMT Thursday), with a reddish fireball lighting up the night sky as its nine Merlin engines roared to life.

The liftoff of the Dragon spacecraft, named Endurance by the crew, was aired live from Cape Canaveral on NASA TV, punctuated by the sound of cheers and applause from mission controllers. Intermittent rain and clouds over the Cape earlier in the day had cast doubt on launch prospects, but the weather cleared by flight time, NASA said.

The mission had been confounded by a string of weather delays since its original launch window on Oct. 31. One postponement earlier this month was attributed to an astronaut’s unspecified medical issue, although NASA said the problem was later resolved.

Live video footage webcast by NASA showed the four crew members strapped into the pressurised cabin of their capsule and seated calmly in their helmeted white-and-black flight suits moments after a launch that appeared to go flawlessly.

Within 10 minutes of liftoff, the rocket’s upper stage had delivered the crew capsule into orbit, according to launch commentators. Meanwhile, the rocket’s reusable lower stage, having detached from the rest of the spacecraft, flew itself back to Earth and successfully touched down on a landing platform floating on a drone vessel in the Atlantic.

‘HOPE YOU ENJOYED THE RIDE’

As the Dragon separated from the upper rocket stage moments later, a launch engineer on the ground radioed to the crew: “Welcome to orbit. Hope you enjoyed the ride. Dragon will take you from here. Safe travels.”

The three American astronauts and their European Space Agency crewmate were due to arrive at the space station, orbiting some 250 miles (400 km) above the Earth, on Thursday evening following a flight of about 22 hours.

The flight marks the third “operational” space station crew sent to orbit aboard a Dragon capsule since NASA and SpaceX teamed up to resume space launches from American soil last year, following a nine-year hiatus at the end of the U.S. space shuttle program in 2011.

BRIDGE TO THE FUTURE

Chari, Maurer and Barron were all making their debut spaceflights with Wednesday’s launch, becoming the 599th, 600th and 601st humans in space.

Both Chari and Barron also are among the first group of 18 astronauts selected for NASA’s upcoming Artemis missions, aimed at returning humans to the moon later this decade, over a half century after the Apollo lunar program ended.

NASA has extolled space station missions in low-Earth orbit as critical training grounds and incubators for technologies that will help achieve the goals of a sustainable lunar presence and eventual human flights to Mars.

With the Crew Dragon flying autonomously through space at more than 17,000 miles per hour (27,360 kmph), the four astronauts were expected to have a meal and get some sleep before arriving at the space station to begin a six-month science mission aboard the orbiting laboratory.
The launch stands as SpaceX’s fifth crewed flight overall in 17 months, and the fourth under NASA’s public-private partnership with the rocket company founded in 2002 by Elon Musk, the billionaire chief executive of electric car maker Tesla Inc

The first was a two-astronaut trial run to the space station in May 2020, followed by the maiden NASA-SpaceX operational “Crew 1” in November of that year.

“Crew 2” flew to the space station in April of this year, and just returned safely to Earth on Monday night with a splash-down capping a record 199 days in orbit.

The latest mission also follows a flurry of recent high-profile astro-tourism flights, including the SpaceX launch in September of “Inspiration 4,” the first all-civilian crew sent to orbit without a professional astronaut on board.

The “Crew 3” team, on arriving at the space station, will be welcomed aboard by its three current occupants - two cosmonauts from Russia and Belarus and a U.S. astronaut who shared a Soyuz flight to orbit earlier this year.