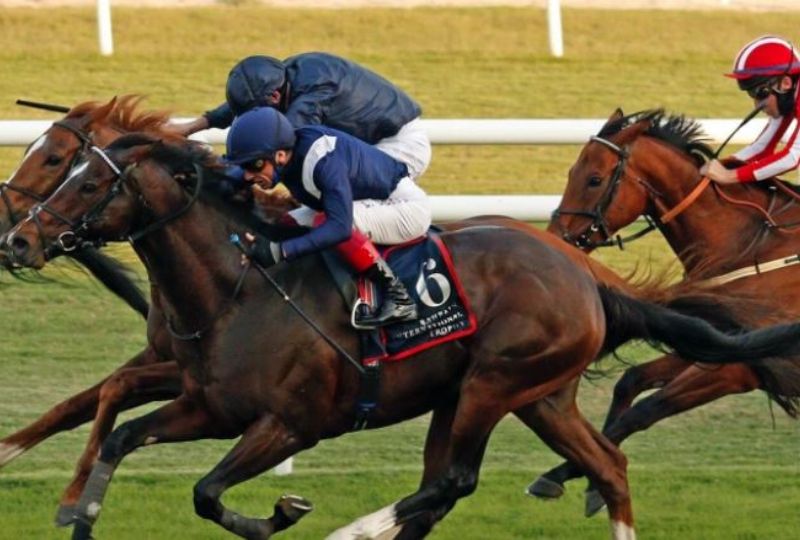 The third running of the £500,000 (BD250,000) Group Three Bahrain International Trophy will be held today at the Rashid Equestrian and Horseracing Club with 13 horses going to post.

The Fawzi Nass-trained Qaader was announced as a non-runner yesterday on veterinary grounds.

Richard Fahey’s star three-year-old filly Fev Rover has been ‘crying out’ for a return to a faster surface, according to her trainer. The daughter of Gutaifan last raced with ‘firm’ in the description when finishing 3rd behind Mother Earth in the QIPCO 1000 Guineas at Newmarket in May. She will be ridden by Paddy Mathers who believes Fev Rover has “thrived” since arriving in Bahrain.

Richard Fahey is having his first runner in the Group Three contest. He said: “I know she won the Prix Calvados on soft ground but she’s a filly I’ve always wanted to get on quick ground. I’ve only had two opportunities this year and she was third in a Guineas and second in a Group Two in Ireland. She’s also a filly I’ve really wanted to step up in trip, but I’ve just never had the opportunity. Every time I found a race for her, it has rained all week, so it’s bound to rain before the race tomorrow! I do feel a mile and a quarter is where she needs to be. She’s been crying out for 10 furlongs. She needs to improve but she might.”

Last year’s fifth, Lord Glitters, represents the David O’Meara yard, and the eight-year-old gelding has worked every morning this week alongside his fellow Yorkshire trained Fev Rover. Lord Glitters will carry a 3lb penalty due to his Group One victory in Dubai earlier this year and he will be ridden for the first time by Jason Watson.

David O’Meara has travelled out to see the race. He said: “I certainly think he still retains his ability. He had a very good winter in Dubai after running fifth in this race last year, and he was second to a progressive Godolphin horse [Real World] giving weight in the Group Three Stensall Stakes at York. His couple of races after that haven’t exactly gone to plan but he’s an old horse now and he feels his joints, so he likes the warmer weather.”

Germany already has an international scalp to their name having taken out the Group One Prix de l’Arc de Triomphe in October and they could be set for another big race success with the eye-catching Penja. Penja is having her first run for Andreas Suborics having been previously trained by Jean-Claude Rouget in France. She was bought at the Arqana Arc sale in October for €1.2 million. She will have her usual jockey on board, with Christian Demuro retaining the ride on the daughter of Camelot.

Suborics believes that the faster surface will play to her strengths. He said: “She arrived in our stable six weeks ago in perfect condition. She travelled very well. I couldn’t be happier with her. She looks very good in her coat, and she loves the fast ground, which is why we decided to come here because we can’t find fast ground in Europe at this time of year. She is a high-class horse but of course it is hard against older, experienced Group horses.”

Pogo is another British challenger whose trainer believes the fast surface will suit. Charlie Hills is returning to this race having finished fourth with Afaak in 2019. Hills said: “Pogo needs fast ground. It looks like there will be plenty of pace on and the track should suit him. He’s been third in a Group One and his last run, placed in a Group Two, was as good as any. A lot of the track is downhill and if ever a horse is going to go a mile and a quarter, this is probably one of the tracks they should try it on. It suits the speed horses. We ran Afaak here two years ago and he was fourth, and he was a miler.”

Appleby said on Barney Roy: “We’ve been purposefully working back from the Bahrain International as it’s a race which is great to be part of. I was pleased with his comeback run in the Group Three Darley Stakes, on a track which doesn’t suit him. We got what we wanted out of it and hopefully he now has his racing brain back and engaged. I think the style of the race will suit him in Bahrain. It’s a slick track there and the tight turns will suit him. If he goes there with his old A-game, he’s going to be a big player.”

On Zakouski, Appleby added: “He’s been a competitive horse who we’ve seen mainly in Dubai. He’s another horse who I feel the conditions of the race will suit and I’m looking forward to running them both.”

Godolphin’s French-trained Magny Cours is another leading contender for the owner, and the Andre Fabre-trained horse will break from stall 10. The fourth and final Godolphin-owned horse, Dubai Future will be ridden by Frankie Dettori and will break from the widest draw, in 13.

Bahrain will be hoping to win the race for a second consecutive time after Simsir won under Lee Newman in 2020. Fawzi Nass has three horses making their debuts for the stable. Emperor Of The Sun will be hoping to emulate Simsir on Friday with the last year’s winning jockey Lee Newman riding the son of Galileo. They will break from stall 7. His stablemate Naamoos will break from 9. What A Welcome, 10th in 2020 for Fawzi Nass, returns to the race but will make his debut for trainer Jalil Al Mallah.

Victory Chime is the first horse that owner Andrew Nevin has ever owned. The six-year-old gelding has won 11 times in 26 career starts for Ralph Beckett with the recent reapplication of a visor rejuvenating the son of Campanologist who was close to retirement earlier this year.

Ireland’s sole representative is the Jessica Harrington-trained Cadillac. He will be ridden on Friday by Shane Foley and the pair will be breaking from stall one.

7 Emperor Of The Sun