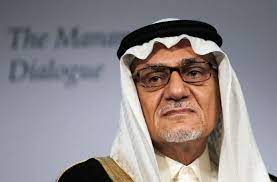 MANAMA: Former Saudi Intelligence chief Prince Turki Al Faisal has called on Saudi Arabia to do whatever it takes to defend itself, including developing a nuclear bomb, to counter the possibility of a nuclear-armed Iran.

“I have said publicly before that we must do everything necessary, including obtaining the knowledge to develop a bomb, in order to defend ourselves against the possibility of a nuclear-armed Iran ...” Prince Turki said in an interview with the American MSNBC channel.

“I am not in the (Saudi) government to say what the government will do, but this is my personal opinion,” he added.

It’s noteworthy that Saudi Crown Prince Mohammed bin Salman said in statements in early 2018 that if Iran developed a nuclear bomb, Saudi Arabia would do the same as soon as possible, according to excerpts from an interview with the American news channel CBS.

In response to a question in the same interview about the reason for the competition between Iran and Saudi Arabia in the region, Prince Mohammed said: “Iran is not a competitor to Saudi Arabia. Its army is not among the five most powerful armies in the Islamic world.

The Saudi economy is greater than the Iranian economy. Iran is far from being equal to Saudi Arabia”.