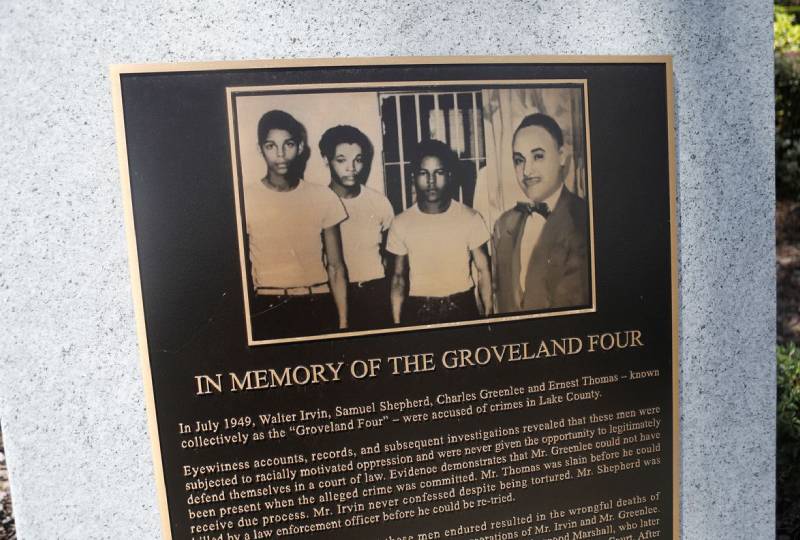 FILE IMAGE: A monument of the "Groveland Four" is pictured in front of the Lake County Historical Society Museum in Tavares, Florida, US July 7, 2020. Reuters Photo

A Florida judge on Monday posthumously exonerated four Black men, known as the ‘Groveland Four,’ wrongly accused of raping a white teenager 72 years ago during the Jim Crow era of Southern US racial segregation.

Lake County Circuit Court Judge Heidi Davis took a final step in the cases of Charles Greenlee, Walter Irvin, Sam Shepherd and Ernest Thomas, the last gunned down by a posse before facing trial. The four men had been officially and posthumously pardoned in 2019.

Davis set aside the judgments and sentences of Irvin and Greenlee and dismissed the indictments of the other two.

In a motion seeking their exoneration, Florida state attorney Bill Gladson said newly uncovered evidence called into question whether any rape was committed and strongly suggested that "the sheriff, the judge, and the prosecutor all but ensured guilty verdicts in this case."

"We followed the evidence to see where it led us and it led us to this moment," Gladson told a news conference on Monday.

Widespread interest in the Groveland Four was renewed in 2012 by Gilbert King's Pulitzer Prize-winning book, "Devil in the Grove: Thurgood Marshall, the Groveland Boys and the Dawn of a New America."

Days after the four were accused of abducting and sexually assaulting a 17-year-old girl in 1949 near Groveland, Florida, Thomas was hunted down by a posse of over 1,000 men and shot 400 times.

The US Supreme Court in 1951 unanimously overturned the convictions of Shepherd and Irvin, who were defended by National Association for the Advancement of Coloured People attorney Thurgood Marshall, who later became the first Black US Supreme Court justice.

That same year, Lake County Sheriff Willis McCall shot the two men, killing Shepherd, as he transported them to a pre-trial hearing. McCall alleged they were trying to escape.

Irvin was retried and convicted again. He was paroled in 1968 and found dead a year later under suspicious circumstances.

The woman who accused the men of raping her when she was 17 opposed the pardons in 2019, saying she was not a liar.