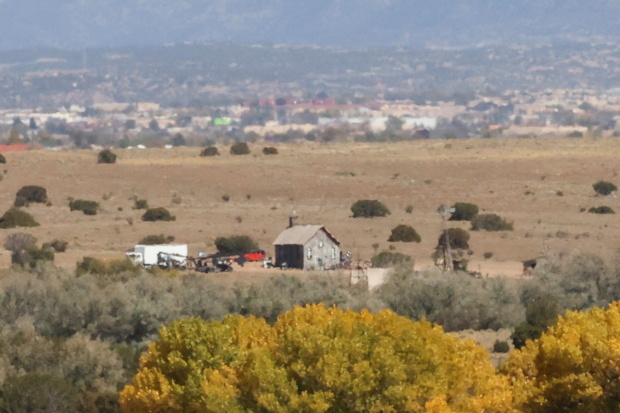 FILE IMAGE: The film set of "Rust", where Hollywood actor Alec Baldwin fatally shot a cinematographer and wounded a director when he discharged a prop gun, is seen from a distance, in Santa Fe, New Mexico, U.S., October 23, 2021. Reuters Photo

LOS ANGELES: Alec Baldwin says in an upcoming TV interview that he did not pull the trigger of the gun that fired a live bullet and killed a cinematographer on the set of the movie "Rust," according to an excerpt released on Wednesday.

Baldwin, who was holding the gun during a rehearsal when it went off, was speaking in his first full interview about the Oct. 21 shooting in New Mexico.

"Well, the trigger wasn't pulled. I didn't pull the trigger," the actor told ABC television journalist George Stephanopoulos, according to the excerpt of the interview due to be broadcast on Thursday.

"So you never pulled the trigger?" Stephanopoulos asked Baldwin.

"No, no, no. I would never point a gun at anyone and pull a trigger at them. Never," Baldwin replied.

He added that he had no idea how a live bullet got onto the set of the Western movie he was making near Santa Fe.