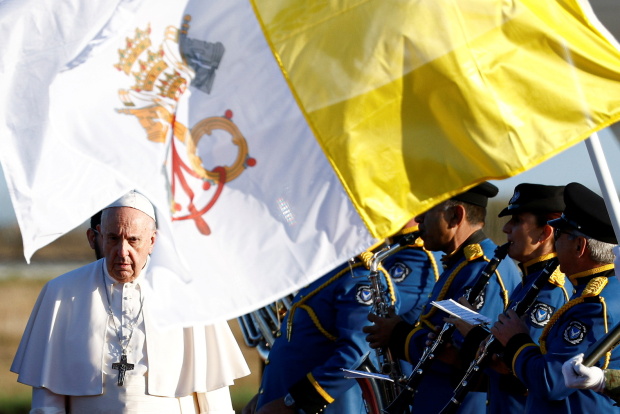 Pope Francis walks past soldiers holding flags of the Vatican and the Cyprus at the Larnaca International Airport while arriving for his visit to Cyprus and Greece, in Larnaca, Cyprus, December 2, 2021. Reuters Photo

LARNACA, CYPRUS: Pope Francis arrived on Cyprus on Thursday with a focus on inter-faith dialogue and lending his support to a country on one of the frontlines of Europe's migration crisis.

Francis, who will travel on to Greece on December 4, was to meet with Cyprus's president on Thursday as well as with the Maronite Church. On Friday he is scheduled to perform mass at an open-air stadium and later hold an 'ecumenical prayer' with migrants at a Catholic Church in the divided capital.

"It will be a beautiful trip but we will touch some wounds. I hope that we all will be able to gather up the messages given to us," Pope Francis told journalists on the aircraft.

Cyprus says it is struggling to cope with an influx of undocumented migrants, either through a dividing line splitting the island, or by boats from the neighbouring Middle East.

Francis, who has made defence of migrants and refugees a cornerstone of his papacy, has arranged to have 50 migrants relocated to Italy after his trip this week.

According to the Book of Acts in Christian scripture, St. Paul visited the island with Barnabas, the founder of Cyprus’s Church, and Mark the Evangelist.

The Pope will be staying at a Franciscan monastery in the capital Nicosia, one of the last divided capitals of the world. The Roman Catholic Holy Cross Church, in the same compound, still bears scars from the crossfire of ethnic strife and from a Turkish invasion triggered by a Greek-inspired coup in 1974.