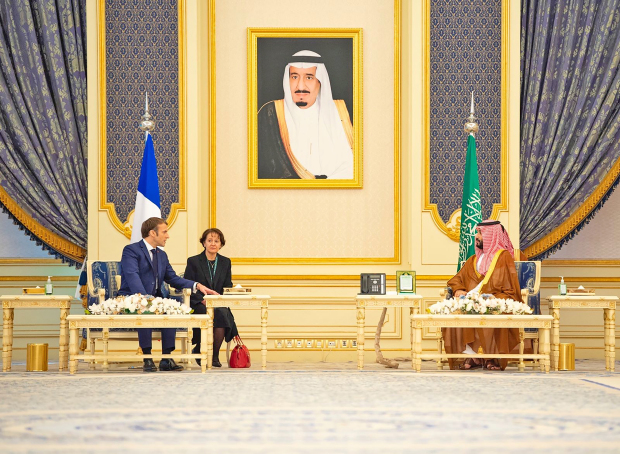 Macron, who was in Saudi Arabia for talks with Crown Prince Mohammed bin Salman as part of a Gulf tour, said Riyadh had committed to supporting reforms in Lebanon, helping it solve its crisis and preserving its sovereignty, Asharq reported.

In October, Riyadh expelled Lebanon’s envoy to the kingdom, recalled its ambassador to Beirut and banned Lebanese imports after former Lebanese information minister George Kordahi made critical remarks about Saudi Arabia’s role in the Yemen war.

The UAE and Bahrain took similar steps against Lebanon following the Saudi move.

Saudi Arabia’s foreign minister said last month that the kingdom’s decision to cut ties was driven by Iran-backed Hizbollah’s growing grip on Lebanon and that dealing with Lebanon’s Hizbollah-backed government “is not productive and not helpful.”

Kordahi resigned on Friday ahead of Macron’s visit in an effort to ease the rift, saying he was acting in his country’s interest to help end the dispute.

Macron said he and Prince Mohammed had called Lebanese Prime Minister Najib Mikati to stress that Paris and Riyadh were committed to supporting Lebanon, the Asharq report said.

Mikati later said the call he had earlier with Prince Mohammed and Macron was “an important step” towards restoring relations with the Gulf.

“It was agreed between the three countries to work together to support the comprehensive reforms necessary in Lebanon,” the statement added.

“We talked about absolutely everything, without any taboos,” Macron told reporters after holding face-to-face talks with Prince Mohammed.

“It was a direct exchange, I hope, effective. I still have the same approach of trying to preserve that channel with leaders to get tangible results.”