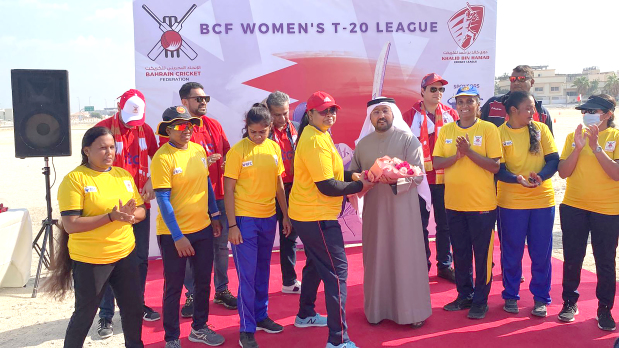 Some of the players with officials

Matches will be played every weekend for the next three months with more than 30 matches scheduled to be held over Fridays and Saturdays.

Earlier, HPCA Queens won the toss and elected to field. BCF Red were restricted to 100 for 7 in 20 overs with opener Hema Raghavendar topscoring with 18 runs off 30 balls. Queens bowled tightly with Pavithra Shetty, Deepika, Prajna Jagdish, Swarna Satish and Shasikala Satish taking one wicket each.

Chasing the score, HPCA Queens reached the target in 11.5 overs. Deepika hit 13 runs while Poorvaja Jagadish scored 10 to set the tempo. Pavithra Shetty was 12 not out and Asha 11 not out.

Hema Raghavendar won the woman of the match award for her all-round show.

The women’s league has received support from the Bahrain Financing Company as the main sponsor of the event.

“Bahrain Cricket Federation is delighted to launch the Women’s T20 League to drive women’s cricket in Bahrain. This will provide the pathway for our talented women cricketers to play in ICC T20 internationals,” said Bahrain Cricket Board Advisory Group chairman Mohammmed Mansoor said. “We are also exploring further opportunities to launch the GCC Women’s T20 Cup in consultation with other GCC cricket boards, which will drive women’s cricket to greater heights.”

BCF general secretary Anoop Kewalram said the Women’s T20 League is the first step towards a vision to promote women’s cricket in Bahrain. “I am pleased to share that we have Bahraini women actively playing cricket and we are working to further increase this participation by supporting women’s cricket at the grass-roots level by reaching out to schools, universities and colleges.”

The BCF has already worked out plans to send coaches to schools and teach cricket free of charge. They have also supplied free kits to ensure that they keep playing the game.