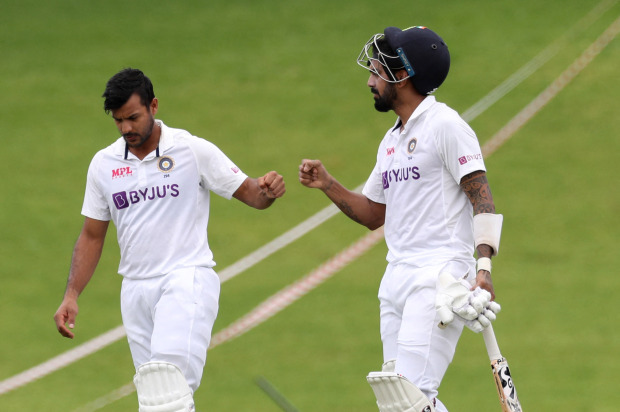 Rahul and Agarwal during their 117-run opening stand

PRETORIA: Opener KL Rahul showed superb application to score a seventh Test century with an unbeaten 122 and steer India to a commanding 272 for three at the close of play on day one of the first Test against South Africa yesterday.

Vice-captain Rahul, who averaged 7.50 in four innings with a top score of 16 in South Africa three years ago, reached his ton off 218 balls as he toyed with a blunt home bowling attack on a slow wicket.

He will resume on the second morning with Ajinkya Rahane (40 not out), whose place in the side had been under scrutiny but played some wonderful shots to share an unbeaten fourth-wicket stand of 73.

Ragged South Africa looked like a side who have not played Test cricket since June, with a number of their players having had no red-ball cricket in the last six months. They bowled too short on a wicket providing little assistance and did not attack the stumps enough after India had won the toss and elected to bat in overcast conditions.

The home side had to wait until the second session to make a breakthrough as India opener Mayank Agarwal (60) was trapped lbw by Lungi Ngidi (3-45) after a 117-run opening partnership with Rahul. Agarwal left the field vigorously shaking his head after a review from South Africa suggested the delivery was striking the top of leg stump.

After waiting 242 deliveries for their first wicket, the home side got with the next ball when Cheteshwar Pujara pushed forward to Ngidi and was caught off the glove and thigh-pad by Keegan Petersen at short leg.

Pujara had only been out first ball once before in his 92-Test career – run out by Ngidi at Centurion Park in 2018. Captain Virat Kohli (35) is now without a Test century in 24 innings but looked in good touch before he chased a wide delivery from Ngidi and was caught by Wiaan Mulder at first slip.