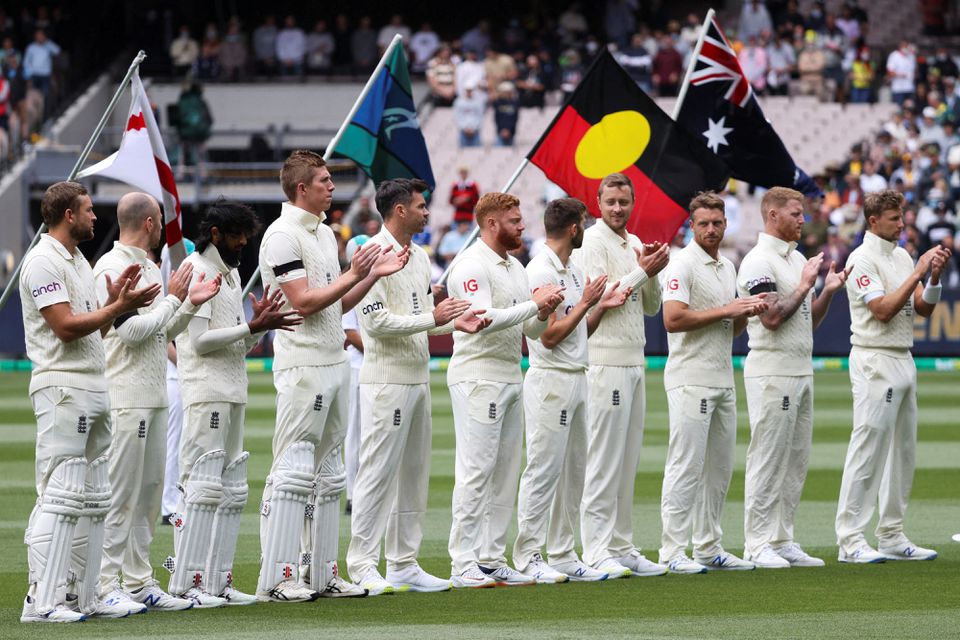 Members of the England team take the pitch for the start of action against Australia in the third Ashes test at Melbourne Cricket Ground in Melbourne, Australia, December 26, 2021. REUTERS/Loren Elliott

MELBOURNE: Australia moved within tantalising reach of retaining the Ashes in Melbourne yesterday but the fate of the series may be decided in a laboratory rather than on the field after the England camp was hit by a rash of Covid-19 cases.

Two England support staff and two of their family members were in isolation after testing positive for Covid-19, throwing a scare through the team as they prepared to head to the Melbourne Cricket Ground for day two of the third Test.

The players were all cleared after rapid antigen tests and play proceeded without disruption barring a half-hour delay.

However, England will need to wait for the results from more thorough PCR tests to be clear to return for day three today, which they do not expect to receive until morning.

Under ICC rules, teams are allowed to make replacements for players ruled out by Covid-19 with the match referee’s approval, so long as the substitutes are considered “like-for-like” and would not provide undue advantage.

An England team spokesman said it was still to be decided how the match would proceed if there was a positive Covid-19 case among the players. It was also unclear whether players would be deemed close contacts of any infected teammates and be forced to isolate.

The Covid tension added to a deflating final session yesterday for England, who were staring down the barrel of another heavy defeat following losses in Brisbane and Adelaide.

After Joe Root’s bowlers rallied their team by dismissing Australia for 267, Mitchell Starc came within a whisker of a hat-trick and debutant Scott Boland grabbed another two wickets to leave England 31 for four at stumps, still trailing by 51 runs.

Captain Root was 12 not out, with Ben Stokes on two, the pair left to mount an improbable rescue mission at the Melbourne Cricket Ground.