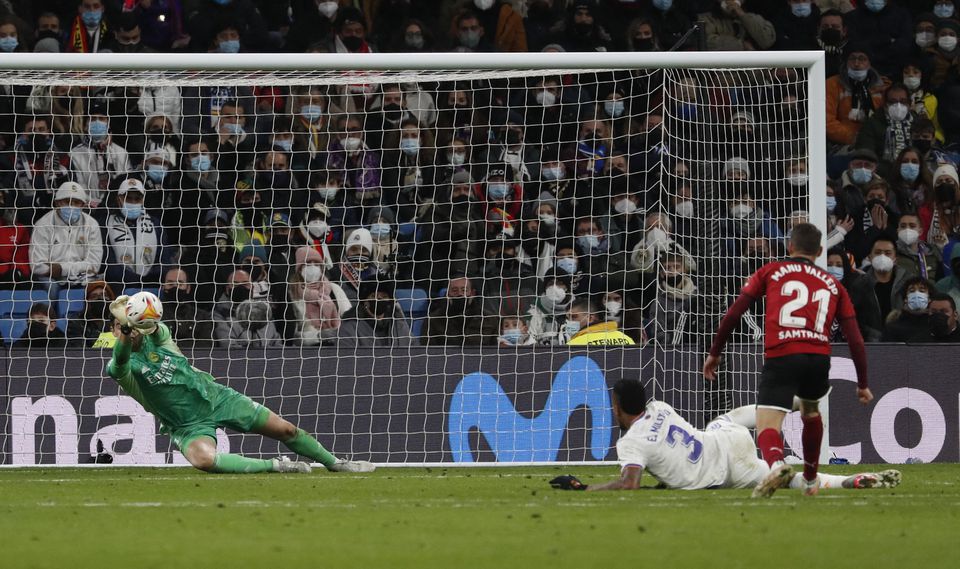 Real Madrid strike duo Karim Benzema and Vinicius Jr both scored a brace to give the LaLiga leaders a 4-1 home win over Valencia on Saturday, putting them back on track after last weekend's disappointing loss to Getafe.

Benzema opened the scoring shortly before halftime from the penalty spot, his 300th goal in all competitions for Real. He is the fourth player in the club's history to reach the milestone after Alfredo di Stefano (308), Raul (323) and Cristiano Ronaldo (450).

Fan favourite Vinicius, who missed Real's last two games after testing positive for Covid-19, came back with a vengeance and scored twice early in the second half.

Goncalo Guedes scored Valencia's consolation goal in the 76th minute with a header on the rebound after Thibaut Courtois had saved his penalty kick.

Benzema sealed the emphatic win two minutes from the end with a low shot from inside the box.

"It's an honour and I'm proud to reach 301 goals with Real Madrid because they are the best club in the world," Benzema told reporters. "We played a great game for ourselves but also for the fans, who deserved it after the loss to Getafe."

Real Madrid extended their lead at the top of the standings to 49 points from 21 games, eight points ahead of Sevilla who have two games in hand and host Getafe on Sunday.

It took a while for Carlo Ancelotti's team to warm up on a freezing winter night at Santiago Bernabeu, where the fans are becoming used to gathering between scaffolding as Real Madrid continue the 800-million-euro ($908.72 million) renovation of their home.

After a flat beginning, Real found their rhythm late in the first half as Luka Modric struck a shot that rattled the crossbar from the edge of the box.

The hosts kept pressing until they found the opener after Casemiro fell inside the area when challenged by defender Omar Alderete. Benzema stepped up and rifled the ball into the top right corner beyond Jasper Cillessen.

Real kept up their pace after halftime and Vinicius scored twice in nine minutes, first after a beautiful combination with Benzema, clearing two defenders before finishing all alone in the six-yard-box. His second came from tapping in a rebound on the goal line following an effort from Marco Asensio.

Benzema's goals meant he stayed clear at the top of the scoring charts in LaLiga this season with 17, followed by Vinicius on 12. Together they have scored 29 of Real's 45 league goals this campaign.