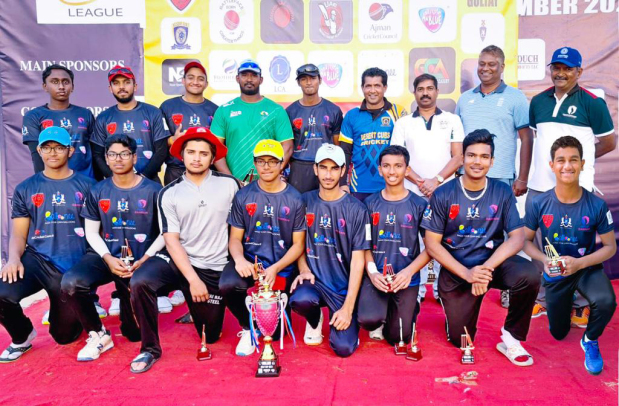 The Bahrain team members with officials

A combined team of Bahrain Cricket Federation and Performance Cricket Academy (HPCA) made a huge impact in the UAE by becoming runners-up in the recently concluded prestigious Gulf Cup 2021 U17 tournament.

They took part in the T30 overs tournament last month at the Ajman Cricket Grounds. Ten top teams, including leading academies from UAE and a team from India, participated in the tournament, organised by YTCA Goltay and Ajman Cricket Council.

The Bahrain team played in Group B against top quality sides such as YTCA Goltay, Desert Cubs, Dubai, Legend and Freedom (India) and won all the four matches to lead the group with eight points.

Young Bahraini Hamza Riaz was named the man of the match in the group encounter with YTCA Goltay while Rishabh Ramesh excelled against Freedom. He was the second top scorer in tournament with 352 runs, including a brilliant 112 not out.

They took on the experienced B Spartan in the semi-final, which they won comfortably by six wickets. Shashank Shukla was the man of the match in last-four clash.

In the final, Bahrain posted 208 for 9 in 30 overs against Desert Cubs Sharjah, the most experienced team in the UAE. The Sharjah team chased down the target losing two wickets in the 26th over to win the tournament.

Boosted by their performances in the tournament, the Bahrain team will aim to return even stronger from the lessons learned and continue to make waves in UAE’s domestic cricket in the future, said BCF president Hatim Dadabai.

“BCF sponsored five players, including four Bahrainis, and we were very pleased with their performances, especially since Hamza Riaz was named as man of the match in one of the group matches. BCF will continue to focus on developing youth cricket and nurturing Bahraini cricketers,” added Dadabai.