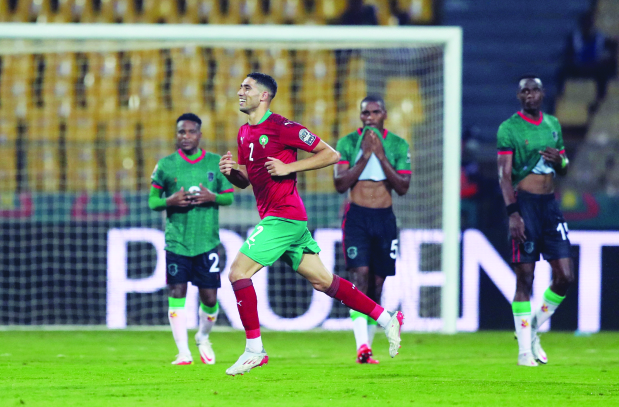 YAOUNDE: Achraf Hakimi curled in a long-range free kick as Morocco came from behind to beat Malawi 2-1 in the last-16 of the Africa Cup of Nations yesterday and stay on course for their first African title in over 45 years.

Fullback Hakimi’s precise strike completed the turnaround at the Ahmadou Ahidjou Stadium after Youssef En-Nesyri had equalised on the stroke of halftime.

Malawi went ahead early after a world class goal from Frank Mhango, who hit a speculative left-footed effort from some 40 metres out and watched in delight as the swerving ball caught out Morocco goalkeeper Yassine Bounou and crashed into the top of the net.

Morocco will meet either Ivory Coast or Egypt in their quarter-final in Yaounde.

In Bafoussam, Senegal’s Sadio Mane scored but then went off with a head injury as they beat nine-man Cape Verde Islands 2-0 in the last 16 of the Africa Cup of Nations at the Kouekong Stadium.

Mane fired home from a set-piece after 62 minutes but had been hurt earlier in a nasty clash of heads with Cape Verde goalkeeper Vozinha, who was sent off for the incident.

Liverpool forward Mane then left the field shortly afterwards complaining of a headache and could be a doubt for the quarter-final in Limbe on Sunday.

Substitute Bamba Dieng scored the second goal deep in stoppage time against a gallant Cape Verde side, who also had Patrick Andrade sent off after 20 minutes.

“It was a difficult game because Cape Verde were very organised,” said Senegal captain Kalidou Koulibaly. “It was even more difficult after the first red card as they really ran around a bit but we can be happy we did the job.”

Senegal’s next opponents are either Mali or Equatorial Guinea, who play tomorrow.

Mane had struck the woodwork in the opening minutes but it proved a false dawn as Senegal laboured through the first half, as they had done in the group phase where they finished top of the standings despite scoring once.

But their task was made easier when Andrade was dismissed for a studs-up challenge on Pape Gueye that continued a spate of similar punishments for dangerous tackles in the tournament.