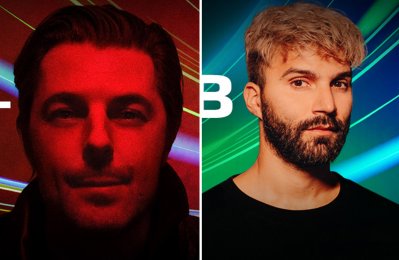 Axwell and R3HAB
The Saudi Motorsport Company (SMC), promoter of the Formula 1 STC Saudi Arabian Grand Prix 2022 – today announced that multi-award-winning DJs and producers Axwell and R3HAB will headline the post-qualifying and post-race concerts on March 26 and 27, respectively at the second Formula 1 race weekend to be staged in Jeddah, Saudi Arabia in less than four months.
The concerts will again take place on the main stage of the Jeddah Corniche Circuit, F1’s newest, longest and fastest street circuit right after the qualifying session and the race have concluded.
Tickets to the next edition of the spectacular Saudi Arabian race weekend are currently on sale to fans at home and abroad. Lewis Hamilton will be aiming to repeat his spectacular victory from last December. He will have to do so in the face of stiff competition from current World Champion, Max Verstappen and a cast of talented contenders such as George Russell, Sergio Perez, Charles Leclerc, Carlos Sainz and many more who will be out to conquer the streets of Jeddah!
In addition to the F1 racing itself, all ticket holders will also be able to enjoy watching the all-action Formula 2 and Porsche Sprint Challenge Middle East support series as well as participate in and witness the many entertainment activities, fan festivals and live concerts that will be taking place across the circuit and F1 Fanzone all weekend.
All ticket holders will have free access to the concerts.
Axwell is a four-time Grammy-nominated Swedish producer and one third of the electronic music supergroup Swedish House Mafia. Originating from Lund Sweden, Axwell’s undeniable influence has shaped the electronic music genre since his initial break-through releases “Feel The Vibe" in 2004 and "Watch The Sunrise" in 2005 via his own imprint Axtone Records.
In 2010, Axwell, along with fellow Swedish producers Sebastian Ingrosso and Steve Angello would form Swedish House Mafia and make their musical debut with "One" also known as "One (Your Name)" (the latter version featuring Pharrell Williams on vocals). The song was a worldwide Top Ten hit and is cited as a defining moment in the expansion of electronic music’s popularity globally.
The trio would go on to release five further singles “Miami 2 Ibiza,” “Save The World,” “Antidote,” “Greyhound,” and “Don’t You Worry Child” before disbanding in 2013 after their sold-out tour entitled “One Last Tour” and their second album release “Until Now.”
In 2014 and in collaboration with Sebastian Ingrosso, Axwell released the single “Roar,” accompanying the Disney Pixar film “Monster’s University”. The two producers officially formed the duo Axwell Λ Ingrosso and released a series of successful singles such as “Something New,” “On My Way,” and "Sun Is Shining” the latter being certified quadruple platinum. The duo's debut album and single More Than You Know garnered even greater success culminating in over a billion streams globally.
In March 2018, Axwell Sebastian Ingrosso, and Steve Angello reunited at Ultra Music Festival Miami for a surprise performance as Swedish House Mafia subsequently announcing a forthcoming new album and tour. In November 2018, Axwell released his acclaimed solo single ‘Nobody Else’ in what was coined as his “return to House music.”
In 2021 Swedish House Mafia returned, teaming up with The Weeknd, for the new single ‘Moth to a Flame’ as part of their third studio album ‘Paradise’.
Multi-Platinum DJ and producer Fadil El Ghoul, better known as R3HAB, has been trailblazing his way through dance music for the past fifteen years. From his breakthrough remixes for Rihanna, Drake, Taylor Swift, Calvin Harris, to anthems such as Platinum-certified "All Around The World (La La La)" and "Lullaby," to his collaborations with the likes of Ava Max, ZAYN, Luis Fonsi, Sean Paul, and more, R3HAB has proven to be one of the most forward-thinking artists in the game. His work has collected over 5 billion streams to date, including 1.1bn in 2021 alone. R3HAB founded his label CYB3RPVNK in 2016, which has passed 4B streams across platforms since its inception.
R3HAB continues to evolve and diversify his sound by working with artists around the globe, pushing the boundaries of dance music as he collaborates across genres and languages. He is Spotify's Most Discovered Artist, one of Spotify's top 200 most streamed artists, ranked #12 on prestigious DJ Mag's Top 100 DJs chart, and has earned 55 Gold and Platinum certificates. R3HAB has embarked on multiple sold-out worldwide tours and was the first dance music artist to sell out 15 consecutive shows in China. On top of that, he performed at the world's top festivals, such as EDC, Ultra Music Festival, Tomorrowland, Balaton Sound, Coachella, Summer Sonic Festival, DWP Jakarta. With his combination of innate artistry and innovative attitude, R3HAB has earned his place as a household name in dance music. - TradeArabia News Service