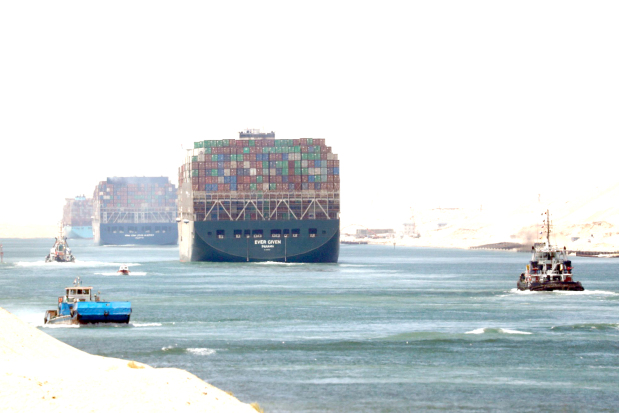 CAIRO: The head of the Suez Canal Authority, Osama Rabie announced yesterday that navigation statistics in the canal during last month set new and unprecedented records in its entire history.

The canal achieved the highest monthly revenue in the history of the canal amounting to $629 million, he explained in a statement, and the largest monthly net tonnage was $114.5m tons – exceeding all previously recorded numbers.

He pointed out that navigation movement in the canal during April saw 1,929 ships cross from both directions compared to the transit of 1814 ships during the same month of the last year – an increase of 115 ships, at 6.3 per cent.

Total net tonnages amounted to 114.5m tons (the largest monthly net tonnage in the history of the canal) compared to 110.2m during April of last year, a difference of 4.3m tons or an increase of 3.9pc.

Rabie added that navigational reports during April detected a significant increase in the rates of transit of various types of ships compared to the same month last year.

Navigation statistics from January to April reached $2.3 billion, compared to two billion dollars during the same period last year, an increase of 18.4pc or a difference of $360.4m.

The head of the authority explained that current indicators of the canal’s navigation movement give a clear view of the vital role the canal has in ensuring the sustainability and stability of supply chains even amidst current global challenges.