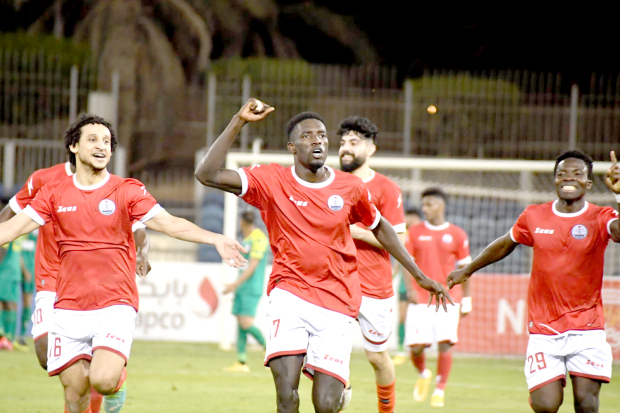 Sitra have won promotion to next season’s Nasser Bin Hamad Premier League after a 1-0 win over Malkiya in the final round of the promotion/relegation playoffs at the Khalifa Sports City Stadium last night.

With Budaiya and Hidd – the other two sides in the four-team playoffs – having already qualified for Bahrain’s main football competition, Sitra entered the match needing just a draw to secure their return to the Nasser bin Hamad Premier League for the first time since the 2015-16 season.

However, it soon became apparent that they not playing for a draw as they piled on the pressure on Malkiya, who had entered the match desperately needing the three points from a win that would guarantee them promotion to the top-flight league after being relegated to the second division in the 2020-21 season.

Premier League champions in 2016-17, Malkiya looked to get an early lead in the 7th minute, but a header from a corner went well wide.

Likewise, Sitra had a chance to take the lead in the 16th minute. However, a header from a free kick, crossed in from the left, was saved by the Malkiya goalkeeper.

Malkiya’s best chance to score in the first half came in the 20th minute, but a header hit the crossbar and went out for a goal kick.

With tempers fraying, the game saw both teams being penalised for several fouls and picking up bookings.

Finally, after nearly taking the lead in the 34th minute through a free kick that just barely went wide of the post, Sitra managed to break the deadlock at the stroke of half-time, when Nigerian Sidena Dabo headed in a goal from a corner kick to put his team up 1-0. Sitra were now on the verge of promotion.

In the second half, Sitra displayed a visible change in strategy and shifted to a strong defensive performance. It was obvious that they were trying to shut Malkiya out of the game.

With time running out and their scoring chances increasingly limited, Malkiya became increasingly frustrated. At one point, their frustration got the better of them, and tempers flared, as a scuffle broke out between the two teams, but the referee was able to restore order quickly.

Aware that they were facing the prospect of spending at least another season in the second division, Malkiya continued to push for an equaliser to try and turn the match around. But they were matched by the Sitra defence at every turn.

Malkiya’s best chance to equalise came in the 79th minute, where a shot went just inches wide of the goal. And an error from the Sitra keeper in the 84th minute almost gifted Malkiya a goal, but this was not their night and the Sitra defence held firm to ensure the mistake went unpunished, blocking a shot that was directed at the goal.

Meanwhile, Sitra almost doubled their lead in the dying minutes of the game, but they were denied by a good one-on-one save by the Malkiya keeper.

The result of this match means that, after the final round of the relegation playoffs, following Hidd’s 2-1 win over Budaiya, also last night, Sitra finish second in the group with five points, behind leaders Hidd, who have seven points. As for Malkiya they will have to settle for at least one more year of second division football, after finishing last, without a single point to their name, following three losses in a row. Budaiya, who finished third on the table with four points, will join Hidd and Sitra in next season’s 12-team Nasser Bin Hamad Premier League.