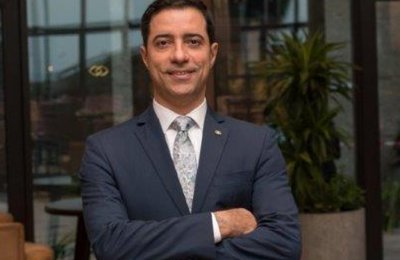 Sofitel Abu Dhabi Corniche, a luxury hotel that melds together French elegance with Arabian culture and style, has announced Firas Sharrouf as its new General Manager.
Originating from Lebanon, Sharrouf has a wealth of experience spanning over 20 years in the hospitality industry. He started his career in Lebanon occupying junior managerial roles in Beirut city, and then soon after his college graduation, he moved to the UAE.
Sharrouf took over several senior roles in luxury five-star properties such as Jumeirah Group, Shangri La, and the Address in Dubai before joining Accor.
Prior to taking his current role, Sharrouf had worked at Fairmont Marina Hotel and Residences. Initially, started as Director of Operations and later as Interim General Manager for four years where he excelled in project management and successfully directed the team in a dynamic environment to establishing the opening of the Fairmont Residences.
Alongside his role as pre-opening Interim General Manager, Sharrouf had managed the acquisition of two luxury properties for the company in two different countries within the region.  - TradeArabia News Service