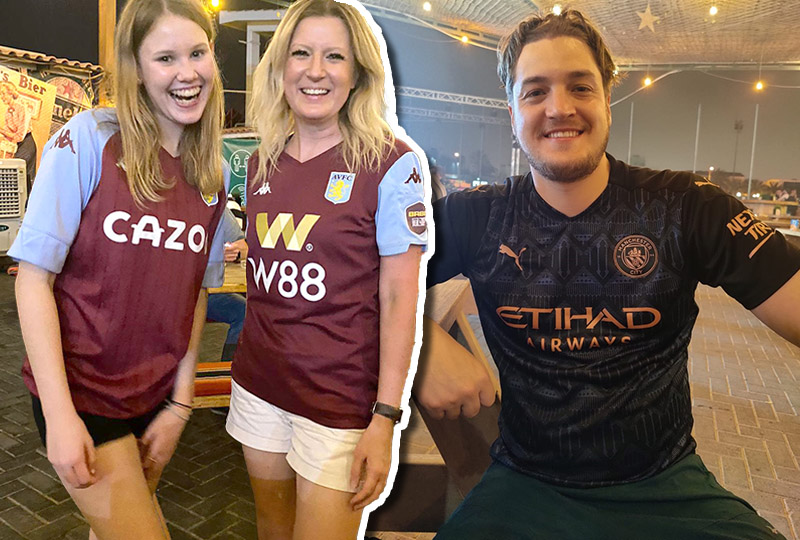 Supporters of Manchester City and Aston Villa in Bahrain are as keyed-up as the teams they back as the English Premier League prepares for a humdinger of a season finale tonight.

City are just one point ahead of second-placed Liverpool, who will be playing Wolverhampton Wanderers at the same time. Should Liverpool win their game with City being forced to draw – or worse, losing outright – the Reds will have achieved their third championship of the season and could well complete a historic quadruple if they triumph against Real Madrid in the Champions League final on May 28.

But passionate City supporter, Ryan Mason, a primary school teacher who has been in the kingdom for a year, believes his team has a very good chance of winning the game and the championship for the second season in a row.

“This team is definitely good enough to win tomorrow,” Mason told the GDN. “I know this is a stressful situation but the lads are more than up to the challenge, I think.”

Mason added that he would probably go to the Bahrain Rugby Football Club (BRFC) to watch the game with some of his City-supporting mates.

Meanwhile, lifelong Aston Villa fan, Laura Sherrington, a private airline executive, will also get together with some of her friends to cheer her team on.

“This has been an interesting season with some seriously shocking results,” Sherrington, who has lived in Bahrain since 2006, told the GDN. “But Aston Villa will now be playing for pride, given that they are 14th on the table at present. They have nothing to lose and everything to gain by winning tonight.”

And Gareth Blakely, who used to live and work in Bahrain but is now back in the United Kingdom, said that he was going to be at the Etihad Stadium to watch the game.

“I have season tickets and I’m going to be at the game tonight,” Blakely, who works in sales, told the GDN by phone from Manchester. “I think City have enough quality to get us over the line. I predict that the final score-line will be either 2-0, or 3-1 in City’s favour. We’ll win by two clear goals!”

Mason agreed, adding that playing at home would give City an advantage.

“Being at home definitely helps,” he said. “If we play our game, we should win comfortably.”

But Sherrington, who attended her first Aston Villa game with her family at the age of eight, was confident that her team could shock the defending champions.

“Who really knows what’s going to happen in football?” she asked, rhetorically. “But I have a feeling that my team will pull off a surprise tonight!”