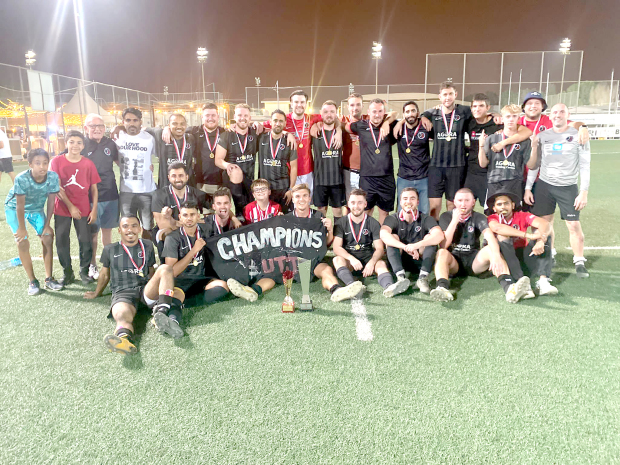 The Janabiyah Juggernauts snatched a stoppage-time victory in the dying embers of an incredible Diogo Pires Cup final to break Dilmun Club hearts and complete an historic double.

In an encounter that truly lived up to the age-old cliché of ‘a game of two halves’, the Juggernauts stormed into a 3-0 lead in the first half before the Dilmun club roared back with three goals of their own in a frantic second-half.

The game looked set to go into extra time before player-manager Elliot Fribbens scored a stunning goal fit to win any game – never mind the showpiece of the Bahrain Amateur Football League – to snatch it at the death.

The first half could barely have been an indicator of what was to come, with the Juggernauts’ favoured 4-2-3-1 formation allowing them to get the ball out wide and run in behind their opponents easily.

The deadlock was broken on 16 minutes as the Juggernauts’ mercurial playmaker Buri Joomer fired in a low free kick into the bottom-right corner.

Dilmun were not to be deterred, as they forced a superb save from keeper Glenn Smith after getting through one-on-one, while there was a moment of controversy as a free kick of their own hit the ‘postage stamp’ and bounced down into the goal – although not over the line according to the linesman.

Seconds later, they were 2-0 down after some superb wing play from Salman Aljar, who fizzed a cross into the box which Cam Gardener could only turn onto the post. Luckily, the rebound fell kindly for Fribbens to tap in.

A third followed before half time, with Gardener firing in a shot from the edge of the box which took an unlucky deflection off a defender to leave the keeper stranded.

As the players trudged off at the break, there was little suggestion of the madness to come. The message in the Juggernauts’ dressing room was to avoid complacency as you always felt they needed one more goal, and so it proved.

On the hour mark, Dilmun got their first back after a poor pass out from the Juggernauts’ defence went straight to their striker, who couldn’t believe his luck. He fired into the empty goal, again the ball hitting the underside of the cross-bar, although this time there was no debate it had crossed the line.

The nerves had set in the Juggernauts’ minds, with some shaky defending and panicked clearances following. Soon after, they were back to within one goal after an almost carbon-copy free kick of the game’s opening goal.

Five minutes from time, bedlam ensued as a Dilmun player found himself unmarked at a corner and powered in a free header. Suddenly, inexplicably, the game was level.

Step in Fribbens, whose mazy run past three defenders before coolly dinking the ball over the keeper evoked memories of Ryan Giggs’ famous FA Cup goal against Arsenal.

The Juggernauts’ bench and supporters poured onto the pitch in celebration although there was still a couple of minutes of stoppage-time to be played.

Unfortunately, Juggernauts striker Paul Dickie’s celebration was deemed excessive by the Dilmun goalkeeper and after a small fracas the former was shown a second yellow card, leaving his team down to 10.

This became nine moments later. It transpired that the winning goal was not to be Fribbens’ last action in a Juggernauts shirt either, as his attempts to stop a desperate Dilmun clawing their way back again were a little too robust as he saw red in the 97th minute for a poor challenge.

Ultimately, there was no time for their opponents to launch another meaningful attack and with both teams out on their feet, a thrilling contest was brought to an end. Relief, jubilation and disappointment were evident in equal measure on the exhausted faces on and off the pitch.

As they added the cup to their league win earlier this month, the Juggernauts’ never-say-die attitude, which has been fiercely evident on multiple occasions this season, once again proved vital at the most crucial moment.