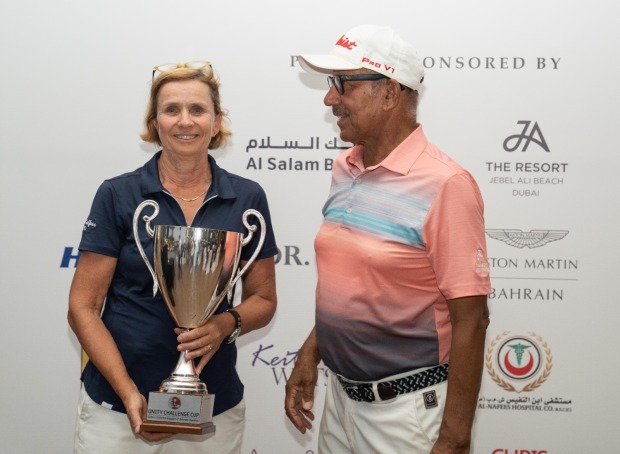 The tournament was a special charity event where both teams participated in a Ryder Cup-style, match-play, pairs format. The brainchild of former RGC men’s captain, Briton Keith Watson, the event was held for the first time last year, with 80 golfers taking part, and raised more than BD10,000 for ‘Smile’, a children’s cancer charity operating in Bahrain.

Although 92 golfers – with Bahrainis and expats represented in equal measure – had registered for this year’s event, there were a few no-shows which meant that 84 golfers eventually teed off at 1pm in a ‘shotgun’ start. All proceeds from the tournament, including a portion of the participants’ registration fees, will go to the Royal Humanitarian Foundation (RHF) with the funds being used to help Bahraini orphans.

“The day went really well,” a pleased Timmers told the GDN soon after receiving the trophy. “We won, so that’s always fun. We played together” – she gestured to Yousif, who stood by her side – “and I think we had a really nice afternoon.”

Yousif concurred, adding that the event had highlighted the kingdom’s golfing community’s consistent efforts to give something back to Bahraini society.

“The golfing community regularly contributes to charities and noble causes in Bahrain,” he explained, raising his voice to be heard over the happy hum of tired but satisfied golfers who lounged around on the RGC’s poolside patio. “And, of course, as you know, golf is a gentlemen’s game. Events like these encourage even occasional golfers to come and participate in worthy causes such as the one that we have raised funds for today.”

In the tournament, expat golfers, clad in blue T-shirts, were paired one-on-one with their local counterparts, in red shirts. Matches were worth a point for the winning team, half a point for a draw and no points for the losing team. The ROTW side reached the winning threshold of 12 points, out of a possible 21, first and easily clinched the cup.

“The nice thing about this day is also about Bahrainis and expats coming together for a good cause,” Timmers said, smiling broadly as she brandished the trophy. “You see blue and red all mixed together and that’s fantastic.”

The response to the announcement of the second edition of the charity tournament had drawn an enthusiastic response from golfers across the kingdom. Awali and Bahrain Golf Club members had also signed on for the event, along with other golfers, who weren’t members of any club.

“It just goes to show how dedicated golfers are to the thought of giving something back to society,” Timmers added. “This is just such a wonderful occasion for all of us to be a part of.”