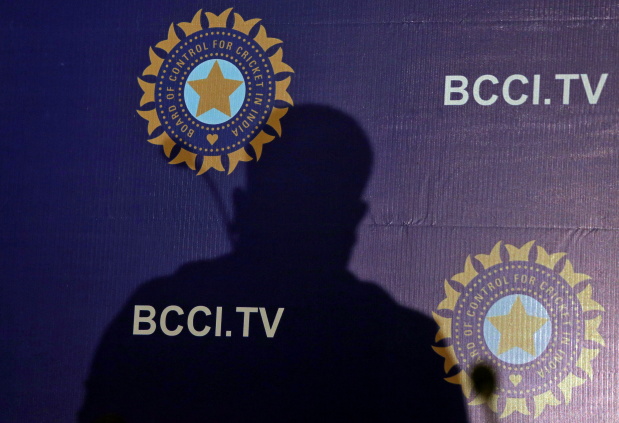 FILE IMAGE: The shadow of a man falls on a backdrop with the logo of the India's cricket board BCCI before the start of a news conference to announce its cricket team's coach, in Mumbai, India, August 16, 2019. Reuters Photo

NEW DELHI/MUMBAI: The media rights auction for the world's richest cricket league spilled over into a third day, with broadcast and digital rights for the Indian subcontinent already fetching the country's board almost $5.1 billion, two sources told Reuters on Monday.

The online auction, which began on Sunday is yet to conclude bidding for another set of media rights including a bespoke package that includes rights for high-value matches as well as rights to broadcast the Indian Premier League (IPL) in foreign territories.

The bidding for television broadcast and online streaming of the matches in the subcontinent concluded on Monday, one of the sources said.

Based on 74 games each season for the next five years, the combined TV and digital rights for the sub-continent rights is worth 397.75 billion rupees ($5.09 billion).

The source declined to say which companies had won the two bids, but media giants like Sony Corp's India unit, Reliance Industries' broadcasting JV Viacom18 and Disney, which currently holds the rights, were all in the fray.

"The bidding went well and it's not over yet," the BCCI official told Reuters. "It's been fairly satisfying and we are confident of an impressive number tomorrow."

The online auction for television and digital broadcast rights from 2023 to 2027 to the Indian Premier League, the hugely popular two-month cricket league that draws top television ratings, began on Sunday morning and continued all day on Monday as well.

The current digital and television rights are held by Star India, now owned by Walt Disney Co, which paid 163.48 billion rupees ($2.09 billion) in 2017.