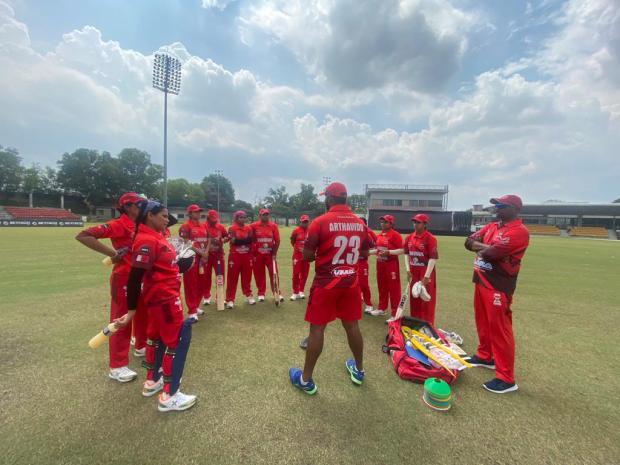 The Bahrain players huddle around the coach during a practice session

BAHRAIN crashed out of the 2022 Asian Cricket Council (ACC) Women’s T20 Championship yesterday when they lost a rain-hit match to Nepal by eight wickets at the Kinrara Oval in the Malaysian capital, Kuala Lumpur, writes ADNAN SIPRA.

Nepal captain, Rubina Chhetry won the toss and sent Bahrain in after persistent rain had reduced the game to a seven-overs-a side affair.

But any hopes Bahrain might have had of slogging their way to victory were dashed inside the first five overs when they lost five wickets for seven runs.

They eventually finished with 14 for six after seven overs with Ishara Maduwanthi, who top scored with six, the last batter to get out.

Nepal needed only 22 balls to overhaul the small target for the loss of two wickets.

“This was a pattern that repeated itself in these last two matches,” Bahrain coach Prabodha Arthavidu told the GDN by phone from Kuala Lumpur. “This was all due to our lack of experience. Our batters kept on getting out bowled and leg-before because the wickets are different to those from the ones in the Gulf.”

But, he added, playing in their first ACC tournament had been a valuable learning experience for his team.

“This was their first experience outside the GCC,” he continued. “It’s part of the learning curve. They’ll hopefully do better in the future.”

The result meant that Bahrain, whose first match against Kuwait was rained out last week before they lost comprehensively to Hong Kong on Sunday, have a solitary point to show from their three matches so far and are out of the running for a semi-final slot.

They will play Bhutan in their last group match tomorrow, the result of which will be of no consequence for them.